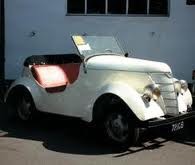 When it appeared in 1938, the New-Map microcar from the well-known motorcycle manufacturer was something of a novelty, but it certainly found favour in the austere postwar period.  It first had a 100cc Fichtel & Sachs engine, and was produced both in Lyon and post - 1945 in Geneva.  In 1947 the name was changed to Rolux VB60 (also known as Microcar Baby).  From 1950 the engine grew to 125cc, while the VB61 had a 175cc engine.  Both motors were single-cylinder, 2 stroke, air cooled and mounted in the tail and transmission was via a 3-speed gearbox and chain drive to the rear axle.  The chassis was made up of welded tubes, the front suspension was by transverse leaf springs and the rear by coil springs.  There were no doors, though a big car look was engendered by a Ford-style front end.  In 1946 a saloon version of the VB60 was shown but never reached production.  Having produced around 300 cars, after 1952 the company continued to make motorcycles and small 3-wheeled commercial vehicles. 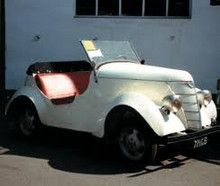 Suggest a link relating to Rolux