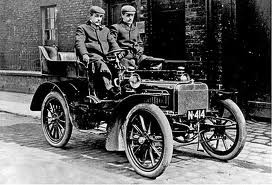 Frederick Henry Royce was manufacturing electric cranes at the turn of the century, but sales were hit by competition from cheaper imports, and he was looking around for new kinds of business.  In 1903 he bought a two-year old second hand Decauville.  He improved the car, then set about making his own.  It had a 1809cc vertical-twin inlet-over-exhaust engine, 3-speed gearbox and shaft drive.  Two further cars had rear-entrance tonneau bodies.  Royce kept the 2-seater, gave one of the tonneaus to his partner Ernest Claremont and sold the other to Henry Edmunds, who was to introduce him and the car to the Hon C.S. Rolls in May 1904.  As a result of this meeting Rolls agreed to take the whole output of Royce cars, so long as they bore the name Rolls-Royce.

Suggest a link relating to Royce