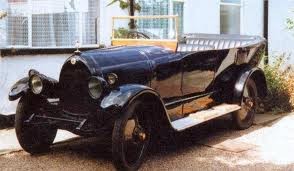 This company was formed in September 1918 by a merger of two old-established engineering companies, Ruston Proctor which had been founded in 1840 and Richard Hornsby which dated back to 1815.  Hornsby were well-known for oil engines in the 1890s, one being used to light the Statue of Liberty.  They also made pioneer full-tracked vehicles which led to the development of the tank.

By the end of World War I the combined companies had a workforce of 13,000.  In an attempt to keep them all busy they launched into furniture, van bodies and the Ruston-Hornsby car.  Like the Cubitt this was seen as a 2614cc made by Dorman or a 20hp 3308cc engine made in-house, American-type central gearchange and a roomy tourer body.  The Dorman-engined model was sold as the Standard and the 20hp as the De Luxe.  Unfortunately, they were expensive for what they offered, at £650 and £750 respectively, and though by 1923 prices dropped in line with all other cars, they never achieved the large sales that the makers hoped for.  About 1500 Ruston-Hornsbys were sold in all over five years, of which the 15.9hp accounted for 1050.

Suggest a link relating to Ruston-Hornsby