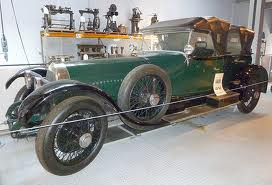 The Sheffield-Simplex replaced the Brotherhood-Crocker which had orginally been made in London, and from 1906 in a new factory built by the wealthy coal magnate, Earl Fitzwilliam.  In 1907 they introduced the completely new 45hp model.  Like the Brotherhood, it was designed by Percy Richardson and had a 6978cc 6-cylinder engine with a 3-speed gearbox mounted immediately behind the engine.

For 1910 the big sixes were joined by two new models built on Renault lines, complete with the characteristic dashboard radiator.  They were the 2882cc 4-cylinder LA3 short wheelbase and LA4 long wheelbase, and the 4324cc 6-cylinder LA5 and LA6 .  After only one season they were dropped in favour of a new six, the 4740cc 25hp Model LA7.

During the war Sheffield-simplex built two types of armoured car on the 30hp chassis, with a single turret for the Belgain Army, and with twin turrets for the Russian.  The 30hp was revived after the war and was shown at the 1919 Olympia Show.