Often regarded as one of the great flops of motoring history, the Sinclair C5 was, however a brave attempt to produce ecological transport.  The C5 was a 3-wheeler featuring a steel chassis and a polypropylene body that the driver simply sat on top of, steering the car by handles placed underneath the seat.  The electric power source was a modified Hoover washing machine motor and the transmission was by a reduction gearbox with toothed belt drive to the rear axle, which could be supplemented by human-powered pedals and chain.  A top speed of 15mph was quoted with a range of 20 miles using a single 12v battery.  Production hopes had been as high as 100,000 per annum but slow sales proved this to be wildly optimisic and the receiver was called in in October 1985, after only 9000 vehicles had been made. 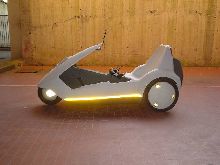 Suggest a link relating to Sinclair