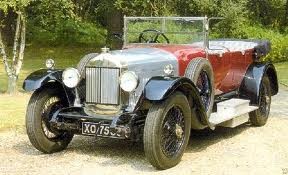 Straker-Squire was a British automobile manufacturer based in Bristol, and later Edmonton in North London.

The company was formed in 1893 at St Philips, Bristol, as Brazil, Straker & Co by the Irish Engineer J.P. Brazil and the London motor agent Sidney Straker. In 1899 Sidney Straker joined forces with Edward Bayley and went into production of steam wagons, joining in partnership with L.R.L. Squire in 1904 and production reached 200 steam wagons by 1906.

In 1907 the company moved into a new factory on Lodge Causeway, Fishponds, at first to manufacture commercial vehicles, including large numbers of early London Buses, and a French car design under licence. The company also produced and successfully raced a number of its own car designs.

When World War I started Sir Roy Fedden, their chief designer, convinced the company to take on aircraft engine repair and manufacture, and that arm of the company was taken over by Cosmos Engineering in 1918. The company built staff cars and lorries during the war, and afterwards all production moved to Edmonton in North London in 1919. Car production continued until 1926 and Sidney Straker was killed in a hunting accident not long afterwards.

Suggest a link relating to Straker-Squire