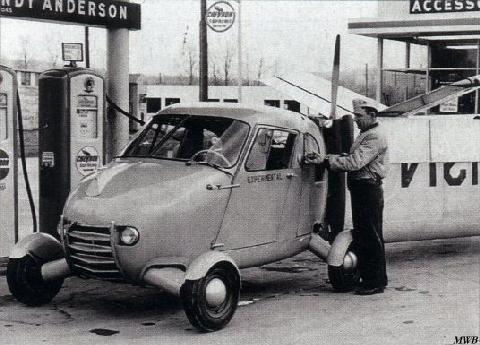 The prototype AEROCAR was ready to be put through a series of tests, both as a road going vehicle and as an aircraft in October 1949.

It had a 4-cylinder Lycoming 0-290 engine of 135 hp at 2600 rpm fitted in the rear of the car component. This drove the front wheels of the car through a clutch during road use and the two blade 'pusher' propeller in the air.

Now painted yellow with silver wings, it was rebuilt to flyable condition and is on display at the AEE [Association for Experimental Education] Air Venture Museum, Oshkosh, Winsconsin, U.S.A.

Possibly the pre-production prototype fitted with a Lycoming 0-320 engine.

As the history of the other AEROCAR's is reasonably well documented, this may have been the damaged Model I that was eventually rebuilt as a Model III by Molt Taylor in 1968.

Built in 1954, this AEROCAR is owned by Greg Herrick of Yellowstone Aviation Incorporated, Wyoming and is on display in Herrick's Golden Wings Museum at Anoka County-Blaine Airport [also known as Jane's Field], U.S.A.

Built in 1960, this was the last of the Model I AEROCARS to be built and is the only AEROCAR flying at this time. It is owned by Ed Sweeney and is sometimes on display in the Air Museum at Kissimmee Gateway Airport, Kissimmee, Florida, U.S.A.

It was once owned by actor and film star Bob Cummings who used it regularly in his TV sitcom 'The New Bob Cummings Show' in the early 1960's. The show was sponsored by Nutri-Pio, the vitamin company and Molt Taylor made a spur-of-the-moment stop at an Earl Scheib paint shop to have them match the yellow and green colours of the sponsor. The car was painted two-tone with green over the roof and down to the waistline and yellow below that. The fuselage is yellow and the wings have a green leading edge.

In 2008 it was featured in a British BBC2 television programme shown on the 28th September and presented by James May [of Top Gear fame] called 'James May's Big Ideas'. In that show, May listed the number of certificates and licences required to own, drive and fly an AEROCAR.....

It has been owned by Marylin Felling of Colorado since 1981, but is no longer airworthy, although Ms Felling assures that it would take only a minimum of working time to get it ready for the air again.

In its early days, it was used to ferry Fidel Castro's brother Raul around Cuba. It hit a horse on the runway and was badly damaged. After repairs were made, it was used from 1961 until 1963 as a traffic-watch aircraft for KISN radio station in Portland, Oregon, when it was painted white with red hearts all over and had the station initials on top and bottom of its wings.

It has since been re-painted deep red and black. The top half of the car body and the leading edge of the wings being black. It was put up for sale on eBay in 2008 for $3.5 million.


Source: Reg J. Prosser
Have you any further information on this car?
Click here to tell us.
There is 1 further picture
[View Full Gallery]
Related Contacts
[ suggest a contact ]
Related Links

Suggest a link relating to Aerocar (Taylor) Model I