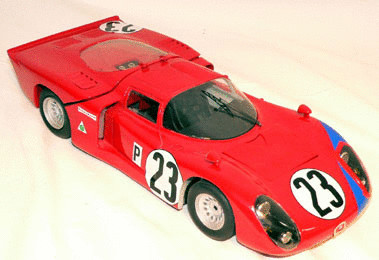 This was a road-going GT version of the car introduced as a 2-litre sports-racer in 1967 and which evolved into the 3-litre 33/3, winner of several important races in the early 1970s.  The road car had the same large-tube light alloy 'H' frame, with extra stiffening at the front by a magnesium alloy casting and extra rear stiffening by sheet steel, and the legs of the 'H' were large enough to take the fuel tanks.  Suspension was by coil springs and double wishbones at the front, coil springs, transverse links and radius arms at the rear, and the rear disc brakes were mounted inboard.

Two valve per cylinder heads were used (dohc naturally) and, aided by Spica indirect injection, this lovely little V8 delivered 230 bhp, a phenomenal output for an engine of 1995cc.  This was delivered via a six-speed  gearbox and aided by light weight (just 1540lb) and a slippery, pretty coupe body by Scaglione, a top speed of 161 mph/259kmh was claimed.

Source: Motorbase
Have you any further information on this car?
Click here to tell us.
There are 2 further pictures
[View Full Gallery]
Related Contacts
[ suggest a contact ]
Related Links