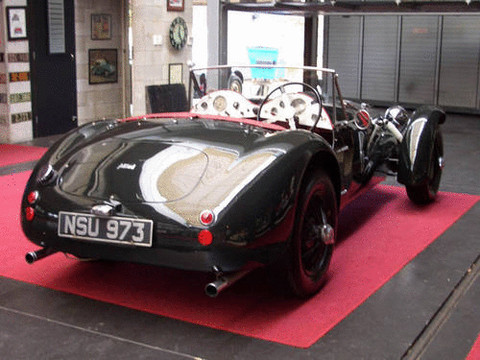 This was a Lotus Seven before its time: sheer automotive simplicity.  It had the shorter (100in) wheelbase of the J1 but was still not a small car, for it had to accommodate husky American V8s (Cadillac was a favourite) which might be over 5 litres and come in highly tuned versions.  To transmit that muscle onto the road a de Dion rear axle suspended on coil springs and located by radius arms was fitted.  One peculiarity of the J2 was that the use of a Ford front axle meant a front track of 56in, while the track of the de Dion rear was only 52in, so they always looked as though they were 'crabbing', even when they were going in a straight line.  A useful option for competition was a Halibrand differential with quick-change final drive ratio: Allard became the British agent for this device which has led to some writers to state that it was an Allard product.  With the right engine, no contemporary sports car could match it off the line.  It was a popular competition machine, being rugged and reliable, and one finished third at Le Mans in 1950 despite losing all gears bar top (third).