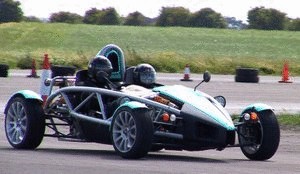 The Ariel Atom is a high performance sports car made by the Ariel Motor Company based in Somerset, England and under license also by Brammo Motorsports in the United States. There have been three Ariel Atom incarnations to date: Ariel Atom, Ariel Atom 2 and Ariel Atom 3. The current model is the Ariel Atom 3, which is also the most powerful of the three. Ariel has also announced an RS Performance model, with a motorcycle-derived 500bhp V8 engine.

The Ariel Atom is unusual in that it is exoskeletal — the chassis is the body — and therefore lacks a roof, windows and other features normally found on road cars. It is available with a range of engines, the top of the range being a supercharged Honda Civic Type-R K20 and a supercharged 2.0 litre, 300 hp (220 kW) GM Ecotec engine. With each of these engines it can achieve acceleration rivaling that of much more expensive automobiles. Although the top speed of approximately 140-150 mph is relatively tame compared to more exotic sports cars, the high power-to-weight ratio (approximately 500 bhp/ton, or 650 bhp/ton supercharged) affords it incredible acceleration- "0 to 60 mph in 2.9 seconds, if you can change gear fast enough" (to quote Top Gear host Jeremy Clarkson)- and the low weight provides excellent control through corners.

The Ariel Atom has received great media interest. In 2004 it was tested by Jeremy Clarkson on the BBC motoring television programme Top Gear, where it lapped their test track faster than, most notably, a Lamborghini Murciélago LP640 and a Porsche Carrera GT and also creatively re-arranged Clarkson's face because of the open cockpit's lack of wind protection. It has also been featured on the Discovery Channel. The car also appears in the video games Project Gotham Racing 3, Project Gotham Racing 4 (available for the Xbox 360 console) and TOCA Racedriver 3 (available for PC, Xbox and PS2).

Brammo Motorsports of Ashland, Oregon signed a deal with Ariel Ltd to manufacture the Atom in the US starting in late 2005. In the US it is available with the supercharged GM Ecotec engine, which was introduced in 2004 on the Saturn ION Red Line and is also used in the Cobalt SS. A limited run of approximately 10 Atoms built in 2006-2007 were powered by imported Honda K20As.

The Ariel Atom was also used (unofficially) by Wrightspeed Inc. as a base vehicle to prototype the electric running gear for an entirely new production vehicle which Wrightspeed is raising funds to build. The Atom-based prototype, called the X1, also has incredible acceleration, reaching 60 mph (97 km/h) in 3 seconds.