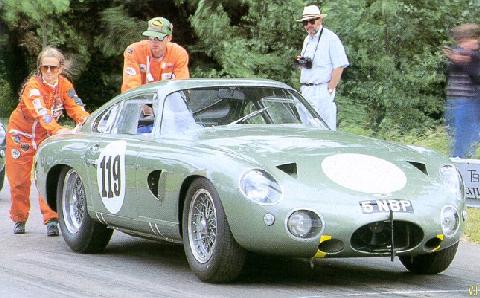 The Aston Martin DP214 was a prototype sports car developed by Aston Martin for use in grand touring-style racing, including the 24 Hours of Le Mans. Two DP214s were built in 1963, with one surviving today.

Just like its predecessor, the DP212, to comply with GT regulations, the DP214 was based on DB4GT chassis, numbers #0194/R and #0195/R. The body was completely redesigned, using elements from the DP212 such as the Kamm tail rear end. The bodywork would be wider than the DP212 though, and the nose would be a completely new design. The DP214 would also use a production Tadek Marek 3.7 litre Inline-6, (bored to 3750 cc from 3670 cc) unlike the DP212's larger 4.0 litre engine.

DP214 0194 had to stop on lap three to unblock a main jet, but had more luck during the race, reaching 5th overall in 110 laps (nearly 8 hours). By 10 hours Kimberley and Schlesser were lying 3rd overall and leading the GT class, however they suffered the same fate as McLaren and Ireland, with a piston failure. That was Aston Martin's last Le Mans of the era. The piston failure was caused by inadequate strength around the underside of the gudgeon-pin boss.

John Wyer records that both cars (as well as DP215) were capable of winning at the Le Mans that year, but their preparation left insufficient time to have forged pistons manufactured so they made do with cast pistons; it was these that failed in the race. Perhaps, another missed opportunity for Aston Martin.

Moving to the Guard's Trophy at Brands Hatch, a lone DP214, driven by Innes Ireland would manage to finish in sixth place overall, and second in class. With the second DP214 (0195) retiring, after spinning off (Kimberley). This was followed by a seventh place finish and fourth in class in the TT at Goodwood Circuit for 0194, with 0195, driven by McLaren retiring after 95 laps with a valve failure. The two cars were certainly capable of winning the TT at Goodwood in the hands of Innes Ireland and Bruce Mclaren, but unfortunately they fell foul of the RAC Scrutineer (Procter). He refused to allow the cars to run with the 6.5" inch rims that they had run at Le Mans, because they had not been homologated, even though by then the production cars were fitted with them as standard. As it was, they were required to race with 5.5" inch rims, which actually narrowed the track by 4" inches and ruined their handling. They had never run with these narrow rims in the first place, and were never to do so again. An angry Innes Ireland spent the whole race going luridly sideways in the car which he had originally put on pole.

Following the 1963 season, both DP214s were sold to John Dawnay's racing team for use throughout the international circuit. With 0195 later being sold to Brian Hetreed in 1964. Mike Salmon in 0194 and Hetreed in 0195 took both DP214's to Daytona 2000 km. Salmon with co-driver Roy Salvadori and Hetreed partnered by Chris Kerrison. Both had been up to 5th place during the race. But 0194 retired with value failure and 0195 slipped back to 17th when the gearbox started to seize.

At the International Trophy Silverstone GT race, Salmon broke the GT record (with 0194) in practice with 1m 41.0s but spun in the wet on the first lap. But worked his way back up to take second place overall. Around the same time, Hetreed took DP214 0195 to the Wiscombe hill climb and set a best time.

Both cars then went to Spa 500 km, but both DP214's had engine troubles and neither finished.

Unfortunately, one of the DP214s (0195) was destroyed in an accident during practice at the Nürburgring 1000 km in 1964, killing driver Brian Hetreed. Hetreed crashe on his first practice lap, with the car rolling down a bank at 'Bergwerk' corner. The other lone DP214 finished out the season, moving onto Le Mans again. With Peter Sutcliffe and Michael Salmon racing at the 1964 24 Hours of Le Mans. At the end of the first lap DP214 was running in tenth place, dropping to eleventh after half an hour. Early evening pit stops had moved the car up to sixth overall, but again dropped, down to twelfth place. However after 17h 45m on Sunday morning they were disqualified due to replenishing the car's oil at the wrong time when lying 11th.

The remains of 0195 were returned to London from Germany and were comprehensively cut up and destroyed. With the engine being repaired and going into an Aston Martin DB4GT Zagato, with chassis number DB4GT/0200/R.

In the closing event of 1964, 0194 finished as the first GT car and fifth overall, in the Silverstone Martini meeting, with fastest lap of 1m 42.8s and 4th in class in the Guards Trophy despite a spin at Clearways.

In 1965 the sole remaining DP214 was bought by Tom Rose, who painted the car, a very dark blue, possibly black in colour. Rose registered the car with the registration number '5 NBP' (which it still holds today) and then competed the car in Aston Martin events during the next year. Results including a win at Wiscombe Park and at the Belgian Day of Records (Jabbeke Speed Trial) Rose set a best time, with a top speed of 163.5 mph (263.1 km/h). Finally driven by Pye, the car competed at B.A.R.C. Goodwood event, were Pye set a best time.

Colin Crabbe then acquired the car in 1965, with the car now showing flared wheel arches to accommodate wider wheels. In 1966 Crabbe raced the project car at the B.A.R.C. event at Oulton Park and was victorious overall. Crabbe was then second overall in the Monte Cristo Trophy at the AMOC St John Horsfall meeting at Silverstone, second only to Ron Fry’s Ferrari 275 LM. Neil Corner also drove DP214 in 1966 and won overall at the Bentley Drivers' Club (B.D.C.).

In 1967 at the Belgian day of Records, Crabbe won again, this time finishing first in class. The final event with Colin Crabbe owning the car, was with Neil Corner in the 'Emu Trohpy' at Aston Martin Owners Club (AMOC) Silverstone event.

After the last race under ownership of Colin Crabbe, Mike Ottway acquired the car with an 3,750 cc engine installed and a damaged DP215 engine as a spare. After this Nick Cussons raced the car regularly, but it is unclear whether Cussons owned the car during this time. In 1973 Cussons won first in class at Curborough, and was again first in class at the Jaguar Drivers' Club (JDC). Cussons was also first overall in the B.R.S.C.C. at Snetterton, also in 1973. In its last outing of the era, Cussons was third in class at B.A.R.C at Thruxton in 1974. During this period Nick Cussons also raced the car in his own Cussons Post-Historic Championship.

During the period of 1974/5 to 1992 the project car has gone under a full, 'pains-taking' restoration by Mike Ottway. The car was then acquired by Simon Draper. Presumably this is when the car was returned to its original colour, which it still has today.