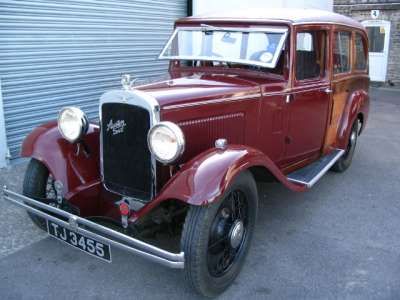 The Austin 12/6 was introduced by the Austin Motor Company in 1931 continuing in production until 1937. To separate it from the earlier, four cylinder, Austin 12, it has become known as the Austin Light 12/6.

There was among British car makers in the early 1930s a vogue for small capacity six cylinder engines and the 12/6 was Austin's example. The side valve engine was new and initially of 1496 cc capacity. It was supplemented by an increased 65.5 mm bore, larger capacity 1711 cc option from 1934. Initially there was a three speed transmission but a four speed was an option from 1932 and became standard in 1933. This gained synchromesh on third and top speed in 1934 and on second in 1935.

The chassis was very conventional with semi-elliptic leaf springs on all wheels and rigid axles front and rear. There was a range of bodies on offer with initially a fabric bodied saloon and a pressed steel six-light (three windows on each side) saloon called the Harley. For 1932 the short lived fabric saloon was dropped but open two and four seat tourers were added. A further saloon with a boot, the Ascot, was added in 1934 and the Harley was dropped in 1935. Also in 1935 the chromium plated radiator shell was replaced by one painted in body colour.

Source: Wikipedia
Have you any further information on this car?
Click here to tell us.
There are 6 further pictures
[View Full Gallery]
Related Contacts
[ suggest a contact ]
Related Links