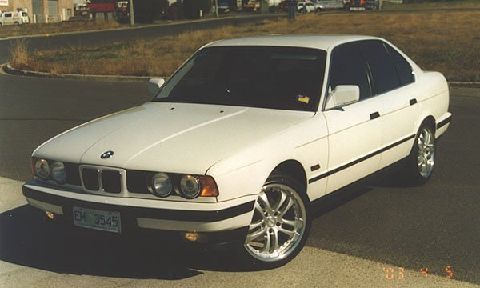 The E34 succeeded the BMW E28 in 1989 with two models. The 525i used the BMW M20 engine while the 535i used the larger M30. The cars were a blend of BMW tradition and modern technology. BMW's traditional FR layout and straight-6 were used, providing the smooth engine and optimal weight distribution BMW customers had come to expect. The E34 also had a much stiffer body and was more streamlined than its predecessor, looking very much like the BMW E32 7-series.

The E34 was among the most reliable luxury cars on the market, earning the best-in-class reliability rating from Intellichoice in 1991. It is still considered one of the most reliable BMWs made. It was also one of the safest cars on the road during its production,[citation needed] providing airbags, 4-wheel anti-lock brakes, and a very rigid body structure to protect occupants in the event of an accident. The E34's 60-0 mph (97 to 0 km/h) stopping distance of 130 feet (40 m) was the best of any production sedan in 1990.  It was also equipped with dynamic stability control (DSC) or skid control.

A few enhancements to the body's cosmetics and functionnality, as well as a slew of engine evolutions, have appeared throughout its years of produciton. Among those, BMW's VANOS technology will have made its first appearance in the M50 2.5L engines built in September of 1992 and later.
Source: Motorbase
Have you any further information on this car?
Click here to tell us.
There is 1 further picture
[View Full Gallery]
Related Contacts
[ suggest a contact ]
Related Links
[ suggest a link ]