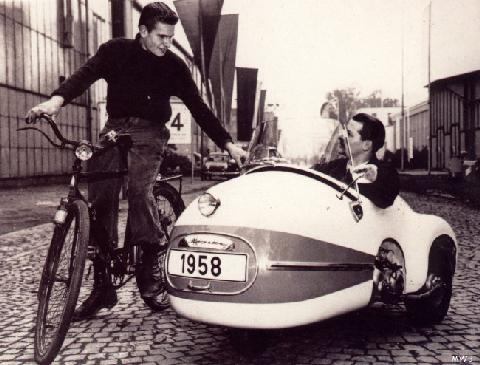 The tiny one-seat 'Mopetta' made its appearance on the Breutsch Cars England stand at the Earls Court Motorcycle Show in 1956.  Probably the smallest car ever built, it had no doors and the only way to climb aboard was for the driver to lower him/herself into the small cockpit in the same way that Formula 1 drivers do today.  It measured 5 ft 7 ins long and 2 ft 11 ins wide and weighed a mere 134 lbs.

Power came from a 49 cc engine that lived in a small, but prominent bulge, just in front of the nearside wheel, the only wheel to be driven.

The show car is still in good working order and now resides in an English collector's garage.

In 1956, Georg von Opel - formerly of Opel cars acquired a licence to build the tiny car under the name of Opelit Mopetta, but only a few prototypes were made.

Source: Motorbase
Have you any further information on this car?
Click here to tell us.
There are 5 further pictures
[View Full Gallery]
Related Contacts