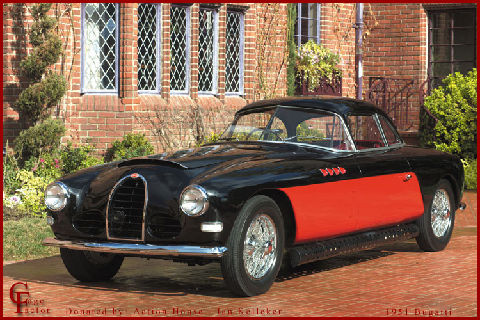 The Paris motor show of 1951 saw the first Bugatti to be shown for a long time.  The first post-war cars closely resembled those which had made the marque famous before the war and they were made in the same factory in Mulhouse where all the famous examples of the Bugatti marque had been made.

There was one major difference though: the founder Ettore Bugatti was unable to be present, having died in 1947.  The Bugatti 101 was the responsibility of the youngest son, Roland Bugatti and Pierce Marco, who had worked for the company since 1919 and worked his way up to general manager.

The Type 101 was a clear successor to the Type 57 with a straight-eight 3.2 litre engine with twin-overhead camshafts.  The engine could also be equipped with a Rootes compressor (turbocharger) which raised the output from 160 to 200 bhp.  Pre-war Bugattis had been renowned for their sporting successes but had not been able to achieve performance levels such as these.  However, this was no longer exceptional in 1951, with a Ferrari engine delivering greater bhp, while a Jaguar XK 120 equalled the performance but at half the price!  Technically, the rest of the car was nothing exceptional.  For example, the Bugatti still had a fixed front axle, albeit highly polished.  Consequently there was no demand for the car and the factory ceased production.  In 1955 attempts were made to produce a Grand Prix car but this never got beyond the prototype.  The factory closed for good in 1956 and was taken over by Hispano-Suiza.  It was the end of the line for one of the great pre-war marques.