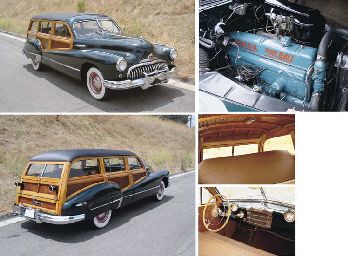 David Dunbar Buick was a plumber by trade when he developed a means of  bonding porcelain to metal.  This invention was tremendously important for industries making products for the kitchen and bathroom and Buick could probably have made much more money for his patent than the $100,000 which he received.  He used this money to establish Buick Auto Vim and Power Company, from which the Buick Motor Company was formed in 1903.

Buick had little success with his cars and hence he was pleased to sell the company in 1904 to James H. Whiting.  The president of the new company was William Crapo Durant who succeeded in making Buick profitable and in establishing the basis of General Motors.

Buick re-emerged in the car market after World War II in 1946 with the final pre-war model, in common with most other manufacturers.  The firm had an advantage though since it had launched a new model in 1942 which consequently stood out positively from the competition.  Buick sold more than 156,000 of them in 1946 and the demand steadily increased with 404,675 Buicks being sold in 1951.  The Buick Super had a straight eight-cylinder overhead valve unit which did only 10 miles per gallon (30 litres per 100 km).

Source: The complete encyclopedia of Saloon Cars - Rob de la Rive Box
Have you any further information on this car?
Click here to tell us.
There are 11 further pictures
[View Full Gallery]
Related Contacts
[ suggest a contact ]
Related Links