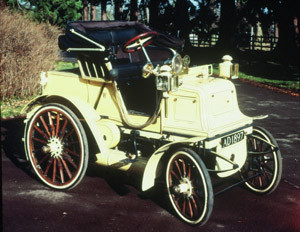 Daimler Company was formed on 14 January 1896 and a factory was opened at the Motor Mills in Coventry.  The company held the British license rights to the German Daimler patents, and was therefore allowed to use the name as well.  Early cars were imported from Germany or France, but production of British-built Daimlers was underway by 1897.

This car is the oldest surviving Coventry built Daimler car, and it is also one of two of the earliest surviving British built cars.  It has only had four owners from new. Originally bought by a Doctor in Shropshire who reputedly used it for tours of Belgium and France.  By 1906 it had passed to the second owner who kept it until 1954. The third owner was Ted Woolley who restored the car and had it registered under the appropriate mark AD 1897.  His exploits with the car were legendary, and included a crossing of the Col du Cenis 7000ft up in the Alps, on a tour from Britain to Munich and Turin.  After his death in 1984, the car was bought by the JDHT.  Further restoration was carried out in 1993-94, at which time the car was returned to its original blue colour.

This Daimler is powered by a two cylinder four horsepower engine, and ignition is by a hot tube system.  The top speed is 24mph (40 km/h), and it cost £375 when new.  It was initially fitted with tiller steering, but this was converted to wheel steering by Daimler in 1899 (the patch on the bonnet covers the hole for the original column).   The hood is made of elephant hide.

The car is maintained in full running order, and regularly competes in the annual London to Brighton Run, held on the first Sunday in November.  The run commemorates the act which came into force in November 1896, and which made it possible to use motor cars on British roads by abolishing the need for an attendant to walk in front of the car – with or without a red flag! – and increased the speed limit from 4 to 12mph (6 to 19km/h).


Source: Motorbase
Have you any further information on this car?
Click here to tell us.
There are 5 further pictures
[View Full Gallery]
Related Contacts
[ suggest a contact ]
Related Links