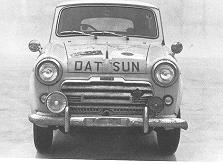 Between 1955 and 1957 the Japanese economy went through a boom period, spurred
on by the lifting of American restrictions imposed after the war. This allowed
for rapid industrial expansion and opened the way for the beginning of worldwide
exports.

An event that truly brought the Datsun name to the forefront was the 1958
Mobilgas Round Australia Trial. This event covered some 10,000 miles mostly on
unmade dirt roads through some pretty harsh terrain. It was agreed and two
Datsun 210's be included. The result couldn't have been better, as Datsun won
the under 1000cc class This was Nissan's first international sporting success
and was to be the first of many.

By 1959 the first exports had made their way to the all important American
market. The 210, although a little small by American standards was a ruggedly
built little car and it did find a few buyers. About 1500 cars were built and
the Datsun 210 became the first car to really break through into the export
market and became a turning point in the history of Datsun. 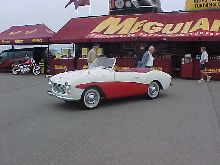