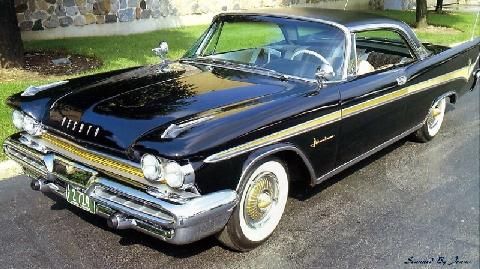 The DeSoto Adventurer is an automobile produced by the Chrysler Corporation and sold under its DeSoto automotive brand from 1956 through the 1960 model year. It was initially DeSoto's special, limited-production, high-performance model, similar to the Chrysler 300. While in production, the Adventurer was DeSoto’s top-trim level car, and offered only as a hardtop coupe in 1956. The model range grew when the coupe was joined by a convertible in 1957, and a four-door hardtop and sedan in its final year of 1960.

Introduced in 1956 as a sub-series of the top level DeSoto Fireflite series, the Adventurer was originally marketed as a limited production two-door hardtop, and available in a white/black/gold color scheme only. The first Adventurer came with a hi-output V8, dual exhausts and custom appointments and trim. Standard trim included dual outside side mirrors, gold wheel covers, radio, electric clock, padded instrument panel windshield washers and heavy duty suspension. A total of 996 cars were sold in its first year.

For 1957, the Adventurer received Chrysler’s forward look design along with other divisional cars. A convertible also joined the two-door hardtop, and again color choices were limited to the black-white and gold color theme. The car debuted in December, 1956, and to rave reviews, foremost among them was Mechanix Illustrated Automobile Editor Tom McCahill who proclaimed the DeSoto as being the best styled of all of Chrysler's brands for 1957.

Like the 1956 car, the 1957 Adventurer was powered by Chrysler’s high output V8, which was now up four cubic inches to 345 bhp (257 kW). Equipped with dual four barrel carburetors, the engine developed one horsepower per cubic inch displacement. For 1957, 1,950 units were produced.

The 1958 Adventurer was an update to the all-new styling that car received in 1957. Along with the annual trim changes, the car also received a new grille with a mesh insert. The cars debuted at the Chicago auto show in January 1958. DeSoto offered fuel injection (produced by Bendix Corporation). Those not equipped with the unit received the dual-quad carburetors. The shortened model year, combined with the effects of the 1958 recession dropped Adventurer production down to 432 units, a 62 percent drop in sales compared to 1957. However DeSoto itself was in the midst of a sales free-fall, and all series production was off brand-wide.

Restyled for 1959, the DeSoto’s look began to take on more traits of the up-market Chrysler. The Adventurer again was limited in its color schemes, and came with the most standard features of any DeSoto automobile. Again the car was powered by the 383 V8, tuned to 350 bhp (260 kW) at 5,000 R.P.M. 687 units were produced for 1959, up from 1958, but not significantly enough to help stem the forty percent drop to DeSoto’s divisional sales.

For its final year, the Adventurer lost its convertible but gained a four-door hardtop and sedan. Instead of being a limited edition model, the Adventurer was the top trim model range for the two series DeSoto line-up for 1960. Ram induction was reintroduced on models with the quad-four carburetor. This was also the only year that car came in variety of colors instead of its traditional white-black and gold combination. Total sales for the Adventurer line posted its best effort with 11,597 models produced.

But rumors surrounded DeSoto that Chrysler was ready to kill the brand and customers reacted by buying other brand cars. Also hurting DeSoto was its design, almost exactly like that of Chrysler, save for the grille and the blade styled tail lights, also drove consumers into Chrysler showroom where they bought the almost identical Chrysler Windsor without the fear that it would be an orphan like the DeSoto was bound to be, and soon.

In its final year of 1961, DeSoto would offer a single car line, offered in two body styles. Chrysler announced the end of DeSoto in November 1960, with production lasting just long enough to deplete supplies of DeSoto trim on hand.


Source: Wikipedia
Have you any further information on this car?
Click here to tell us.
There are 13 further pictures
[View Full Gallery]
Related Contacts
[ suggest a contact ]
Related Links