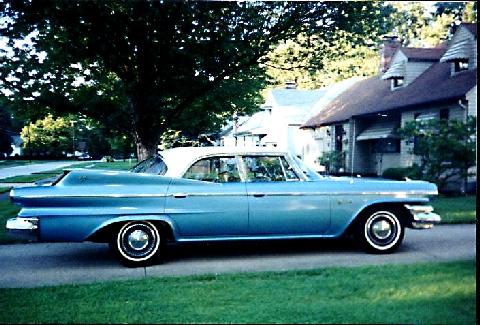 The Dodge Matador was a full-sized automobile produced for the 1960 model year by the Dodge division of the Chrysler Corporation.

The Matador was one of two new models produced by Dodge in 1960 when the marque dropped its long running Coronet, Custom and Custom Royal models. The Matador was designated Dodge's full-size base trim vehicle, with the Dodge Polara becoming the make's full-sized premium model. All Matadors were V8-powered — Chrysler's Slant Six was not an available option on Dodge's senior cars in 1960.

The Matador (and the similar, better-trimmed Polara) featured styling cues that were carried over from 1959 models, itself an evolution of Virgil Exner's "Forward Look" cars introduced in 1957. Like these cars, the 1960 Matador continued the Dodge styling hallmarks of stacked "jet pod" taillights, however, the size of the lights was greatly exaggerated, with the lower light set into the rear bumper. The design also incorporated Dodge’s trademark (shortened) tailfins, which included small vertical taillight lenses placed on the vertical surface at the back of the fin; again. the purpose of the shortened fin was meant to exaggerate the length of the “jet pods” holding the taillights. Up front, the car featured a small grille comprising six stacks of chromed rectangles nested in a massive (and complex) front bumper assembly. As a base model, the Matador lacked exterior excessive chrome trim and plainer interiors than found on the Polara.

The majority of cars built by Dodge and sold during the 1960 model year were in Dodge's new "smaller" and less expensive full-sized model, the Dodge Dart, which fielded three sub-series (Seneca, Pioneer and Phoenix) of its own.

Low sales volume — and the overwhelming popularity of the Dart model — prompted Dodge to drop the Matador nameplate for the 1961 model year.