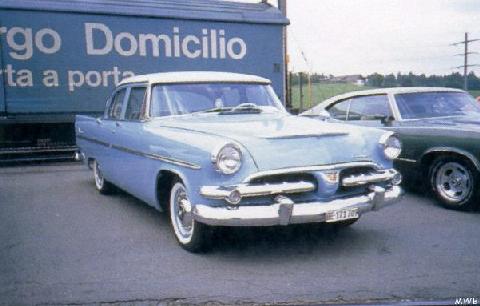 From now on, the cars were given the usual annual facelift.  The 1953 models were almost entirely new.  The grill had been retained from the 1952 model but the windscreen was now one piece of curbed glass, which was described as "panoramic".  The cars were still available with the old six-cylinder engine but there was also a V-8 engine in the range.  This new 3,954 cc engine, which was named "Red Ram", developed 142 bhp at 4,400 rpm.  A further new model, the Dodge Royal appeared in 1954 and was available with Power-Flite automatic transmission.

The cars got new bodies again in 1955 but the panoramic windscreen had been dropped because although it was visually pleasing, too many people bashed their knee-caps against the corners.