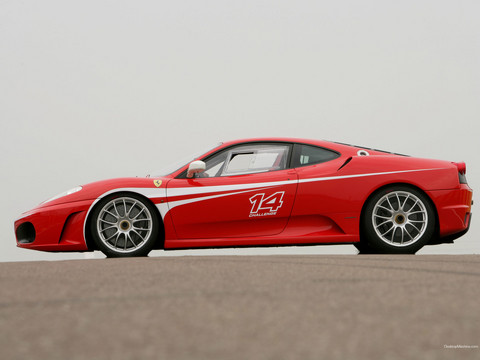 The body has been redesigned to be more curvaceous and aerodynamic. Although the drag coefficient remains the same, downforce has been greatly enhanced. A great deal of Ferrari heritage is found in the car: at the rear, the Enzo's tail lights and interior vents have been added. The car's name has been etched into the Testarossa-styled driver's side mirror. The large oval openings in the front bumper are reminiscent of Ferrari racing models from the 60s, specifically the 156 "sharknose" Formula One car and 250 TR61 Le Mans cars of Phil Hill.

The brakes on the F430 were designed in close collaboration with Brembo. The result has been a new cast-iron alloy for the discs. The new alloy includes molybdenum which has better heat dissipation performance. Another option Ferrari is providing are Carbon fibre-reinforced Silicon Carbide (C/SiC) ceramic composite discs. Ceramics have much higher resistance to heat and brake fade than metals, the F430's brakes offer not only good performance but also a longer lifespan. Ferrari claims the brakes will not fade even after 300-360 laps at their test track.

The F430 includes the E-Diff, a computer-controlled limited slip differential a type of active differential which can vary the distribution of torque based on inputs such as steering angle and lateral acceleration.

In the US the company requested an exemption from the airbag design requirements, which was eventually granted, allowing the car to continue to be sold in the US.