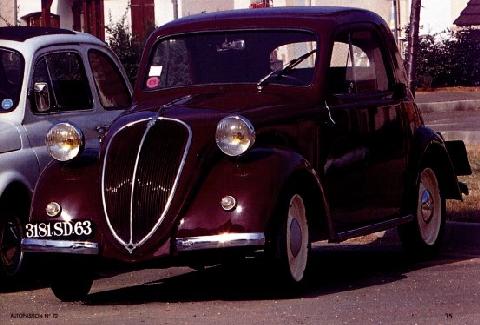 The FIAT 500 went into production in August 1936 with very little change from the second prototype.

Free standing headlamps rather than flush fitting lights was the most obvious modification.  It was available from the begining to the end of production 19 years later as either a 'fixed head' (or hardtop) saloon or a convertible saloon.  The fixed head saloon was on sale in England priced at £120 and the convertible saloon £125.10s (125 pounds and 50 pence).

The convertible saloon had a fold-back top panel from windscreen to rear waistline and was the most popular of the two body styles. Consequently, it sold in greater numbers, making it much easier for potential collectors to find these days.

Possible reason for its popularity is the fact that driving the hardtop saloon became very claustrophobic after a time.  A lifelong feature of all Topolino's were the two front opening, rear hinged (suicide) doors. It is virtually impossible to push-start the Topolino on your own with this type of door. One slip and you are 'attacked' or could be run over by your own car if you don't move quickly enough.

To save expense, the door windows had sliding glass panels and therefore needed no winding mechanism.  The front glass panel could slide back and forth and was lockable when closed, but the second glass panel was fixed.  Unfortunately, this meant that hand signals were totally impossible and flush mounted semaphore type trafficator's were usually fitted as 'extras' just under the waistline to the rear of the body after the doors.  Just as on the original BMC Mini of later years, the lack of window winding mechanism gave a hollow door and when taken to a 'one-skin' thickness with just a thin trim panel on the inside, the few inches of elbow room made available made the cabin feel very roomy.

The original production model had quarter-elliptic rear springs and everything stopped at the rear axle.  This left the rear end of the body hanging in space. Introduction of a small vehicle like this one, in van form, was ideal for the small business and it was obvious that a van version would follow very quickly, but the unsupported rear made things awkward and necessitated the use of extensions to carry the loads being added to the chassis.  Therefore, after the first 46,000 units were built, the chassis was extended over the back axle and half-elliptic springing was incorporated into the design.

To differentiate between the two, they were known as the series one - short chassis (with exhaust infront of the offside rear wheel) and series two - extended chassis (with normal rear exhaust).

It was inevitable that the FIAT 500 range would extend to the introduction of a tiny van that would cater for the smaller businesses and naturally, there were differences between this and the standard car in order to perform its duties efficiently. Engine, chassis, running gear and internal instrumentation was identical to the saloons, but the rear axle ratio was changed from 8.39:1 to 8.41:1. Tyre pressures were increased to: front 1.75 kg/sq.cm (25 ibs/sq.in) and rear 2.25 kg/sq.cm (32 lbs/sq.in).  The hardtop body was in steel over a wooden frame with two standard 500 doors.  These were fitted with safety glass and had exterior mirrors.

Double doors at the rear opened to a space that would carry a load (excluding the driver) of 300kg (6 cwt).  Only one black washable leather seat was fitted and the spare wheel was in the cab on the drivers side.  Maximum speed in 4th gear was approximately 82 km/hr (50 mph)

As the development of the FIAT 500 progressed, the original 500 (above) became referred to as the 500A by enthusiasts, but this suffix was never officially aknowledged by the FIAT Motor Company.

Source: Reg J. Prosser
Have you any further information on this car?
Click here to tell us.
There are 4 further pictures
[View Full Gallery]
Related Contacts
[ suggest a contact ]
Related Links
[ suggest a link ]