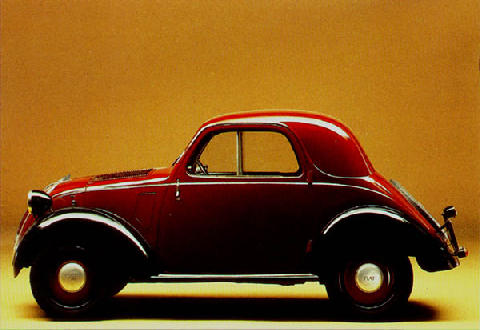 Visitors to the 1948 Geneva Motor Show could be excused for thinking that the tiny Topolino's arranged on the FIAT stand were unchanged from previous years.  Their bodies were outwardly identical.  As before, they had either an all steel roof or a convertible roof panel that opened down to the rear waistline.  But internally, there had been detail changes to the floor and steering wheel and improvements had been made to the brakes, suspension and the 12 volt electrical system.  The biggest modification had been to the engine, which was still of 569cc, but now had overhead valves. This resulted in a 3.5 bhp increase in power and the maximum speed improved.  The only external feature that distinguished the 500B from the original 500 is the bonnet lock which now had a small turn-knob instead of the spring loaded fastener.

The FIAT 500B Van
The Van was of similar specification to the saloons but with the following differences:

The FIAT 500B 'Giardiniera' Station Wagon

At the Turin Motor Show in September 1948, FIAT introduced their first official four seater in the shape of an American influenced Station Wagon which they called the 'Giardiniera'.   This derivative of the 500B was a more practical vehicle than the English 'Convertible Four', being capable of carrying passengers or goods.  When used for carrying goods, the back seat squab folded to give a flat carrying area. Steel, timber and laminated plastics were used in the construction of the bodywork.

The specifications were as the normal saloons, with the exception of the following:

Wooden frame (structural) and side panels.
Top outside: weatherproof fabric lined, locked by hinged device.
Two side windows, each fitted with one sliding and one fixed glass similar to the doors.
Single rear door constructed of wood and masonite, with fixed glass.
Two adjustable drop back front seats and a two piece rear seat with drop back.
Driving mirror with interior light incorporated.
Spare wheel in rear underfloor recess.
The final drive was altered from 4.875:1 to 5.2:1.
Overall length: 3,360mm (11' 2 7/8"). No bumpers were fitted.
Overall height: 1,430mm (4' 8 1/4")
It could accomodate 4 passengers and 50 kg (110 lbs) of luggage.
Maximum speed: 90 kph (56 mph)
Fuel consumption: 6.5 litres per 100 km (43 mpg)

The FIAT 500B was only in production for one year and altogether, over 21,000 were produced.

Source: Reg J. Prosser
Have you any further information on this car?
Click here to tell us.
There is 1 further picture
[View Full Gallery]
Related Contacts
[ suggest a contact ]
Related Links

Suggest a link relating to Fiat 500B Topolino