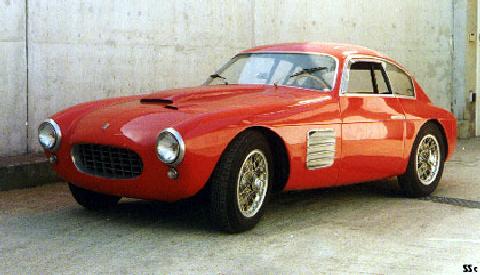 The Fiat 8V (or "Otto Vu") is a sports car produced by the Italian automaker Fiat from 1952 to 1954. The car was introduced at the 1952 Geneva Motor Show. The name 8V was chosen because they thought that Ford had trademarked the name "V8". They weren't a commercial success, but did well in racing. Apart from the differential the car did not share any parts with the other Fiats (but many parts were made by Siata and they used them for their cars). The 8V was developed by Dante Giacosa and the stylist Fabio Lucio Rapi. The engine was a V8 originally designed for a luxury sedan, but that project was stopped. The Fiat V8 had a 70 degree V configuration of up to a 1996 cc of volume, at 5600 rpm the engine produced 105 hp (78 kW) in standard form giving a top speed of 190 km/h (118 mph). The engine was connected to a four speed gearbox. The car had independent suspension all round and drum brakes on all four wheels.

Top management were preoccupied with more run of the mill projects, however, and only 114 of the high-performance coupés had been produced by the time the cars were withdrawn from production in 1954. Nevertheless, they continued to win the Italian 2-litre GT championship every year until 1959.

34 of the cars had a factory produced bodywork by Carozzeria Speciale FIAT. Some cars had the bodywork done by other Italian coachbuilders. Carozzeria Zagato made 32 that they labelled "Elaborata Zagato". Ghia and Vignale also made bodyworks. Most were coupés, but some spyders were made as well.