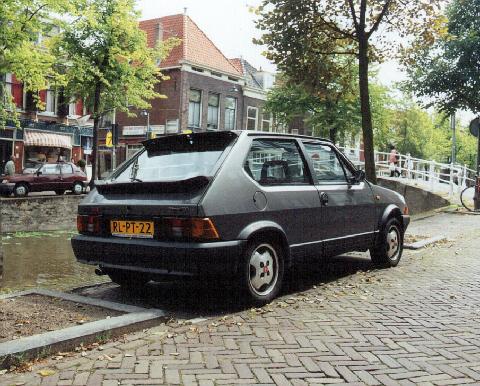 The Fiat Ritmo is an automobile from the Italian manufacturer Fiat, launched in 1978. Styled by Bertone of Italy, it was seen by some as the most distinctive looking small family car in Europe on its launch in 1978 Turin Motorshow. It was badged in Britain, Canada and the U.S. as the Fiat Strada. During its production which ran from 1978 to 1988, a total of 1,790,000 units were made.

Underneath its quirky looks, the Ritmo used most of the front-wheel drive running gear which could be found in the more conventional looking 128, which continued production in some regions until 1984. A cheaper alternative to many other cars in its class from manufacturers such as Ford and Renault, the Ritmo struggled to attract buyers outside its native Italy and Spain. The 1.1 L (60 PS (44 kW; 59 bhp)), 1.3 L (65 PS (48 kW; 64 bhp)) and 1.5 L (75 PS (55 kW; 74 bhp)) petrol engines were reasonably refined and economical, but were somewhat underpowered for the size of the car, and unexciting. In 1980 the Ritmo diesel was introduced with the 1714 cc engine (55 PS (40 kW; 54 bhp)).

In 1981 the Ritmo Super (UK: Superstrada) was introduced with a variety of small changes and, most significantly, revised engines with 75 PS (55 kW; 74 bhp) (1300) and 85 PS (63 kW; 84 bhp) (1500). Also in 1981, the first sporting Ritmo, the 105TC, made its appearance. This used a 1585 cc Fiat DOHC engine derived from that in the 131 and 132 models producing 105 PS (77 kW; 104 bhp). This model featured the same 14-inch (360 mm) wheels as the Ritmo Super, but with black centre hubcaps. UK & Irish models featured the black & silver Cromadora alloy wheels (5.5 x 14) as standard. The 105TC was distinguishable from the lesser Ritmo models by its front fog lights integrated into the front bumper, integrated front spoiler combined with wheel arch trims, black lower door paint, black mesh air intake, and lower hatchback rear spoiler.

A few months later the Ritmo Abarth 125TC was introduced in Europe; it was never officially sold in the UK, as the position of the exhaust downpipe would have clashed with the Right Hand Drive steering gear. The 125TC was a heavily modified and revised 105TC with a 1995 cc DOHC with 125 PS (92 kW; 123 bhp), ventilated front discs, a new ZF gearbox, revised suspension settings and strengthened components. Outwardly, the 125TC differed only slightly from the 105TC - it gained the chunky 4-spoke 14in alloys later seen on the Bertone Cabrio models, featured a joint "Fiat Abarth" badge on the rear hatch, and the side badges featured an Abarth Scorpion. The 125TC version had top speed of 188 km/h (117 mph) and it could accelerate from 0 to 100 km/h (62 mph) in 8.7 seconds. Significantly the Abarth models were the last true Abarth cars to be assembled on a separate Abarth production line following the Fiat buyout in 1971, thus ensuring the car of Classic status.

Technologically, the biggest innovation of the Ritmo was not the car itself, which took the underpinnings of the 128, but the way in which it was manufactured. Fiat, already an industry pioneer in automated assembly, took the ambitious step and made the Ritmo the first car to be almost completely built by robots, earning the car the advertising tagline "Handbuilt by robots".

Press leaks ahead of launch indicated that the car would be named Fiat 138, highlighting its role as a successor to the successful Fiat 128, but by the time of its announcement Fiat had resolved to follow the precedent set by the Fiat Mirafiori of giving the car a public name, Ritmo, rather than a mere three digit number. The Italian word "ritmo" is usually translated into English as "rhythm". "Strada", the name applied in certain anglophone markets, can be translated with the word "road".

A 1982 facelift saw the Ritmo's styling become more restrained with more conventional re-designed front and rear ends. Base models sold on the continent featured the by-now familiar 5-bar grille with single round headlamps set in a conventional grille, whilst all other models featured twin round headlamps (in the UK, all models of this generation featured twin headlamps). The rear gained conventional light clusters either side of the rear numberplate. The 105TC was relaunched with revised interior trim, a dashboard mirroring that of the earlier Ritmo Super, and an upper hatchback spoiler in place of the lower one. In the UK, 7-spoke alloy wheels replaced the earlier Speedline ones. The advertising name was revised to Strada II in the UK, although the car remained badged as a Strada. The US version was unchanged but discontinued at the end of the 1982 model year, leaving only sports cars in the US Fiat lineup (X1/9 & 124 CS). Most significantly, a hot hatch version — the Abarth 130TC — was added. This model was based on the 125TC with a 1995 cc engine, but with performance increased to 130 PS (96 kW; 128 bhp) by replacing the single Weber carb used in the 125TC with twin Solex/Weber carbs on a side-draught manifold, and improved cam profiles. The 130TC was capable of 195 km/h (121 mph) and accelerated from 0 to100 km/h (62 mph) in 7.8 seconds. It was a raw hot hatch fitted with Recaro bucket seats as standard in the UK (optional in Europe) and significantly it was the only 1980's hot hatch to continue utilise carburetors instead of fuel injection coming with either twin Solex ADDHE or Weber DCOE40 carburetors. Ignition timing was controlled electronically. Although appearing outwardly similar to the restyled 105TC with its lower door & wheelarch trims, the 130TC could be distinguished by its polished 4-spoke alloy wheels (continued from the earlier 125TC), aerodynamic perspex front door wind deflectors, and lower hatchback spoiler. The raw powerful twin-cam mated to a close ratio ZF gearbox made it a handful to drive, with the performance to outpace many of its contemporary rivals such as the Volkswagen Golf GTi, Ford Escort XR3i, Vauxhall Astra GTE and the MG Maestro.

1985 saw a minor facelift to the Ritmo range, featuring new rectangular door handles to the 5-door versions only (the 3-door versions retained the circular door handles). In truth, these were simply Regata parts. Other changes included restyled front & rear bumpers, and lower plastic panels on the doors (again, taken from the Regata). The rear bumper now housed the number plate at low level, whilst the space between the rear lights was filled with a plastic panel. The 1714 cc diesel engine was replaced with a 1697 cc unit from the Uno 60D, developing 60 PS (44 kW; 59 bhp). The 105TC 3-door model was replaced with the 5-door 100S (also a 1585 cc DOHC engine). The 130TC Abarth came with the same external changes as the other models, in addition to new wheels and interior trim. In 1986, a new diesel version was launched with a 1929 cc intercooled turbodiesel (80 PS (59 kW; 79 bhp)), and was badged as the Ritmo Turbo DS (5-door only). The 100S and the Turbo DS were not sold in the UK or Ireland, nor were any of the fuel injected models.

The year 1988 saw the last Ritmo roll off the production line and the more conventional Tipo take its place as Fiats C-Segment Car. Also 75 i.e and 90 i.e with catalytic converters were made to some markets, these had slightly lower power output.

A saloon version, the Regata, was also launched in 1983, with limited success outside Italy. Mechanically similar to the Ritmo, it was offered in 1.3, 1.5 and 1.6 (all petrol) and 1.7, 1.9 and 1.9 Turbo diesel models. An estate version, the Regata Weekend, was launched in 1984, and featured a folding rear bumper section to create a level loading bay. The Regata received a minor facelift in 1986 (bumpers, doors, interior) as well as fuel injection being available with some engines, most notably on the 1585 cc "100S i.e.".

The Ritmo Cabriolet was launched in 1981 styled and assembled by the Italian design house Bertone. This model was facelifted at the same time as the Ritmo hatchback models; however, instead of the 1982-on 5-bar grille, the Bertone Cabriolet models featured the simple Bertone roundel. It looked striking and was cheaper than a Golf Cabriolet but not up to Volkswagen standards in terms of quality or ability, despite Volkswagen having entrusted assembly of the Golf Cabriolet to Karmann, and Fiat the Ritmo to Bertone.

The Bertone Cabriolet was sold in various European markets in petrol-engined form only (75S/85S/100S, some with fuel injection) until 1988. There were various special editions, including Chrono and Bianco (all white) models.

Spanish car maker SEAT began their history as a Fiat licensee, making rebadged clones of Fiat cars, until the agreement was dropped in 1982. From 1979 to 1982 a Spanish version of the Ritmo, the SEAT Ritmo, was produced in Spain near Barcelona. When the licence expired, SEAT had to change the least possible number of pieces in their model range so that Fiat could not sue them on the basis of patent infringement, and the SEAT Ritmo yielded to the SEAT Ronda, which remained in production until 1986. Before the Volkswagen Group takeover, SEAT showed to the press a black Ronda unit with all the in-house developed parts painted in bright yellow in order to expunge any doubts about their right to continue assembling the car, and also about the future of the firm SEAT and their factories.

Later, a 4-door version of the Ritmo was developed on the same underpinnings, called the Málaga. SEAT's subsequent takeover by Volkswagen saw the Fiat derived models being quickly killed off, including the Málaga.

The Fiat Ritmo/Strada underpinnings continued in the 1st generation SEAT Ibiza sold between 1985 - 1993 before being replaced with a Polo based model after the Volkswagen buy-out.

The Ritmo name has subsequently been revived by the Australian Fiat Importer, Ateco Automotive, by badging the New Bravo Fiat Ritmo upon its launch in October 2007. Rival car maker Mazda, already uses the name Bravo for the B Series pickup truck in the region, hence preventing Fiat from also using the name in Australia. Pre-launch indication were that the Ritmo name was to appear on New Zealand bound cars, but this never eventuated and they use Bravo.

Source: Wikipedia
Have you any further information on this car?
Click here to tell us.
There are 2 further pictures
[View Full Gallery]
Related Contacts
[ suggest a contact ]
Related Links
[ suggest a link ]