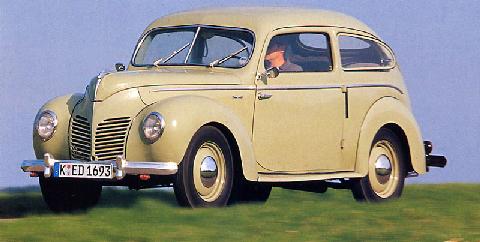 During World War II, the Ford factory built trucks for the army but this did not escape the attention of the allies who quickly destroyed the plant in bombing raids.  Despite this, trucks rolled from the lines once more in 1945.  It was not until 1948 though that cars were again made.  These were small Taunus models of the type Ford had made before the war.  These two-door saloons were four-seaters with a 1,172 cc four-cylinder side-valve engine under the bonnet which produced 34 bhp at 4,250 rpm.  The Taunus was not very fast but could exceed 62 mph (100 kph).  The Taunus also became available as a convertible in 1949 with bodies assembled by Deutsch Coachworks.  The Taunus Special or "Spezial" followed later with a different grille and power steering and, then the Deluxe in January 1951, which for the first time had a single element windscreen.