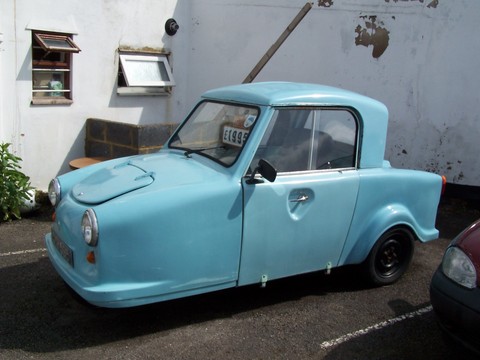 Until the late 1950’s there was no set standard for the vehicle and so many designs appeared ranging from one - two seaters. As a result, the Ministry of Health. standardised its requirements which stated that the vehicle was to be powered by a 147cc air cooled Villiers, engine, have a single seat and have steel pressed wheels where by the single front wheel was powered. In addition the vehicle was also to have hydraulic braking and an electric starter all encased by a fibreglass body in Ice Blue.

The vehicles were then leased to disabled drivers as part of their disability benefit. The Invacar was modified several times and changes saw Austin Mini wheels being used and a change of engine in the early 1970’s when the Villers engine ceased production. The Invacar was then fitted with a much more powerful 4-stroke 500cc & 600cc Steyr-Puch engine which gave a maximum speed of up to 82 mph.

It was the Thundersley Invacar that became the most popular of Invacars as it remained in production until the end of the final DHSS contact in 1977.

Information Submitted by: Andrew Kobzan
Source: Motorbase
Have you any further information on this car?
Click here to tell us.
There are 11 further pictures
[View Full Gallery]
Related Contacts