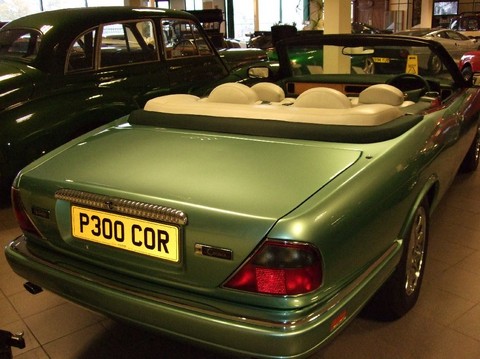 Manufactured by Jaguar Cars S.V.O ( Special Vehicles Operations).  This car had no engine or electrics, and was used for display purposes only. The Jaguar Enthusiasts Club has recently had the Car put into fully operational use.

The following information is provided by Bleasie.

The New Daimler Corsica. A Concept Car To Celebrate 100 Years of Motoring History.

Named after the coachbuilt 1931 Daimler drophead coupe, the Corsica was unveiled at a Centenary Gala Evening at Jaguar's Browns Lane plant on Friday 17th May 1996.

To Quote the now, Sir Nick Scheele 'We wanted to mark this historic milestone, in the history of Daimler with a concept car which truly evokes the spirit and the heritage of the marque'. It was conceived by the late David Boole, Jaguars' former Director of Communications & Public Affairs.

The hood which has a glass rear window, is fully automatic and stows beneath a hard tonneau cover. The project was carried out by a team of craftsmen headed by SVO Manager Frank Marsden, & principle SVO Engineer Gary Albrighton.


Source: Motorbase
Have you any further information on this car?
Click here to tell us.
There are 4 further pictures
[View Full Gallery]
Related Contacts
[ suggest a contact ]
Related Links