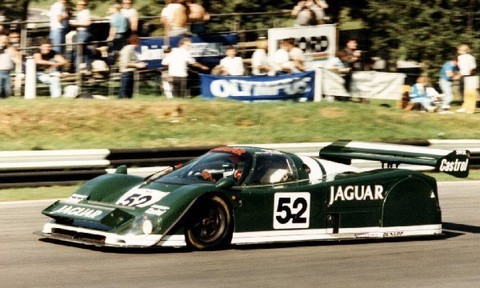 The long awaited return to Le Mans came in 1984 when Jaguar teamed up with the American Group 44 team who designed and produced a sports racing car around the Jaguar V12 engine. Two cars were entered for the 1984 race but both failed to finish. In 1985 a Group 44 car managed to finish the race in thirteenth place, winning the GTP category, the first time in twenty-two years that a Jaguar had been classified as a finisher.

Following the success of Tom Walkinshaw and his TWR Racing Team which dominated the European Touring Car Championship with the Jaguar XJS, TWR were given the task of designing a sports racing car to win Le Mans for Jaguar. The cars that were entered in the 1986 and 1987 Le Mans all performed well but luck was not on their side, they all succumbed to failures that were incidental rather that fundamental to the cars' design or construction.

In 1988 Jaguar went to Le Mans in strength, with an entry of five XJR-9 cars, all powered by the Jaguar V12 engine producing 750bhp from a capacity of 7.0 litres. Two of the cars retired but the remaining three went on to finish first, fourth and sixteenth. The winning Jaguar, driven by Jan Lammers, Johnny Dumfries and Andy Wallace, completed 394 laps and covered a distance of 5332.79km (3313.63 miles), in comparison the winning D-type of 1957 covered a distance of 4397km (2732 miles).

This was Jaguar's year in sports car racing, as 1988 also saw Jaguar take the world championship with wins in six out of ten Group C races. The Le Mans victory was repeated with the XJR-12s which came first and second in 1990, and another world championship fell to Jaguar in 1991, although the best placing at Le Mans that year was second. In 1993, an XJ220C won the GT class at Le Mans, in Jaguar's latest appearance at the Sarthe circuit to date. And who knows, the Jaguar may yet one day return to its favourite hunting ground.


Source: Motorbase
Have you any further information on this car?
Click here to tell us.
There are 13 further pictures
[View Full Gallery]
Related Contacts
[ suggest a contact ]
Related Links