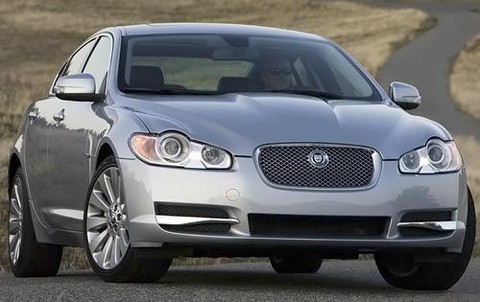 The Jaguar XF is a mid-size luxury car / sports sedan made by Jaguar Cars (now Ta Ta Motors India). It was launched in the UK in 2008 and replaced the S-Type, in the company's line-up. The production version of the XF debuted at the 2007 Frankfurt Motor Show, and customer deliveries commenced in March 2008.

In January 2008, the XF was awarded the prestigious What Car? Car of the Year award as well as taking away the prize in the executive car category. The XF was also awarded Car of the Year 2008 from What Diesel? Magazine.

The XF was developed at Jaguar's Whitley design and development HQ in Coventry, UK and, is built in Castle Bromwich, Birmingham.

The Jaguar XF has earned its status as a true Jaguar now that it's been recalled... twice. In bang-up British car fashion, at least one of the problems is electrical. The XF's instrument panel is supposed to offer audible feedback for a variety of functions like turn signals, safety belt warnings and basically anything that dings. Wires that power the instrument cluster's integral speaker can fracture, rendering the panel mute.  The fix is apparently little more than a reconfiguration of some software we wonder if the panel's software will pipe its audio to the stereo instead that strikes us as one of the slick things you might be able to pull off with CAN.

The other XF recall involves a rear seat belt that could have been improperly installed. The outboard rear seat belts may have an improperly installed D-Ring that could fail to rotate properly, which would hinder occupant protection in the event of a crash. The fix for the rear belts is to inspect and correct the problem. Welcome to the family, XF!