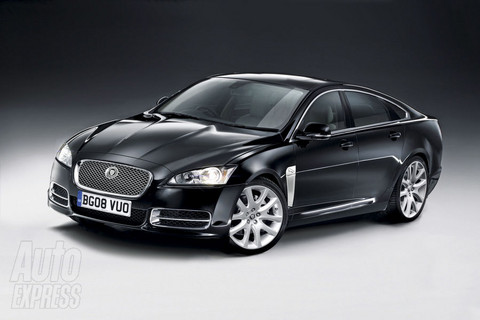 It's the big cat that's got bosses full of pride!  Jaguar insiders have been talking about the new XJ for months and, with these pictures, we can finally see why they've been so excited.  This is our best look yet at the car described by Jaguar as one of the most radical it has ever produced. The new flagship limousine, set to make its world debut in July, has a bold shape designed to draw the limelight away from the Mercedes S-Class and BMWs latest 7-Series.

In addition to its striking body, the new XJ will benefit from a futuristic interior, along with a range of more powerful, hi-tech engines.

As you can see, the model takes themes first seen on the widely acclaimed XF Auto Express's current Car of the Year  and makes them even more dramatic.  The stylish nose adds larger air intakes to the aircraft-inspired grille and angular headlights, while the sporty, coupe-like roofline slopes towards the boot at a more rakish angle than on the XF.

Bold tail-lights and a smart chrome strip finish the rear.

Under the skin is the current XJs lightweight alloy chassis. But this has been totally re-engineered at the back to incorporate a development of the XK coupe's rear suspension, plus increase passenger space.

Inside the car, many of the innovations seen on the XF are to be carried over, such as the rotary gearknob that rises from the centre console. Yet there will be even more dramatic touches, and buyers can expect the leather and wood to have the kind of special feel usually reserved for the likes of Bentley.

There won't be any shortage of power on board, either. Top-spec models are set to benefit from the XF's new 5.0-litre direct-injection V8 engine, which produces 385bhp in normally aspirated form.

The flagship XJR has a supercharged version, pushing out 503bhp, as it targets the Audi S8 and Mercedes S63 AMG.  This range-topping car will be able to cover 0-60mph in about five seconds and hit a top speed of 155mph.

However, a new 271bhp 3.0-litre twin-turbocharged diesel engine is expected to account for the majority of XJ sales. This will be capable of returning an amazing 40mpg  the same as the recently launched Diesel S version of the XF thanks to the new XJs lightweight alloy construction.

All models will have a six-speed auto box with steering wheel paddleshifters.  And they promise the excellent ride and handling balance for which Jag is famous.

After a reveal in July, the XJ makes its public debut at September's Frankfurt Motor Show.

Sales start before 2010.
Source: Bleasie
Have you any further information on this car?
Click here to tell us.
There are 4 further pictures
[View Full Gallery]
Related Contacts
[ suggest a contact ]
Related Links