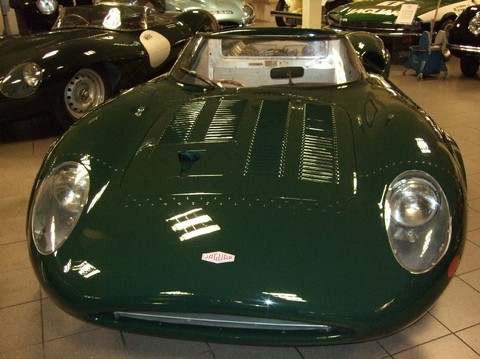 There is only one Jaguar XJ13 in the world and you are looking at it!

The Jaguar XJ13 is one of the most visually appealing cars of all time.  It carried a nameplate of one of the most successful marque's at Le Mans during the 1950's, Jaguar, with five wins in just seven years. The engine that conjured up the wins for the British marque was a direct descendent of the famed XK Six-Cylinder that could be found in their successful and stunning line of road going vehicles.

Built as a potential Le Mans contender, it never competed in any race.  Its development inevitably had to take second place to that of the much more important new saloon car which became the XJ6, launched in 1968.  By the time XJ13 was completed, its design had become obsolete against new cars from Ferrari and Ford, never mind the Porsche 917.  The Le Mans regulations were changing, and prototype cars were limited to engines of 3 litres. To run cars with larger engines, manufacturers had to build fifty examples as production cars (later reduced to twenty-five).

Jaguar's reign at LeMans was brought to an end when their D-Type was made obsolete due to new racing regulations which limited engine displacement to just 3.Ltrs. Jaguar returned to Le Mans a few years later with a racing version of their E-Type but it was no match for the potent Ferrari's. Jaguar's racing program was officially over, but designers continued on a new engine and chassis that could carry the Jaguar name across the Le Mans finish line faster than its competition.  As racing regulations became relaxed during the early 1960s, Jaguar saw their chance to return with a V12 engine. The car was drastically different to the prior racing C and D Type cars. It had a mid-engine rear drive layout and a design meant to take advantage of the fast-passed course and sweeping curves of Le Mans.

Claude Bailey was given the task of developing a new engine. There were seven prototype engines created with two built to racing specifications and fitted with twin overhead camshafts. The engine was created from aluminium with the six cylinder banks mounted at a 60-degree angle. Experiments were done with carburation, such as the six twin choke setup, but later replaced in favour of the more advanced Lucas fuel injection system. The carburetored versions produced 445 horsepower in comparison to 500 horsepower with fuel injection.  The engine had a displacement size of nearly 5 Ltrs. and could be further tuned to gain a couple hundred more horsepower.

The design duties were given to Malcolm Sayer who had been responsible for designing the C and D-Type race cars of the fifties and sixties. This was another big task, as accomplishments on the racing circuit usually translate into sales for the production based cars.  Poor performance usually does the opposite. The crew began with a new mono-coque chassis with the layout and engine bay similar to the Lotus 25. Just as with the engine, the chassis was formed from aluminium which eliminated the need for steel sub frames to carry the suspension. The engine was used as a fully stressed member and the engine and transmission carried the rear suspension.  The Sayer designed body was created from aluminium and was finished near the close of 1966.  With all the use of aluminium and other weight-saving techniques, the car weighed in at just under 1000 kg.  This was the Experimental Jaguar Number 13, which served as the basis for the vehicles name, the XJ13. It was brought to the track for its inaugural outing in early 1967. This clandestine outing was to test the vehicles capabilities and discover its shortcomings.

David Hobbs drove the car on the MIRA track and easily broke the track record.  It was now ready for Le Mans. The entire project had been done in secret, as the Board of Directors felt it may have a negative effect on the sale of their six cylinder sports cars. As the XJ13 was being finalized and prepared for serious competition, rule changes were made and immediately the car was obsolete. 1968 regulations for prototype racing cars were set at a maximum of three Ltrs.  The Jaguar XJ13 was retired before it ever circled the track in formal competition. Work continued on perfecting the V12 engine for use in production vehicles.  By 1971 the engine would enter into production in the third generation of the E-Type.

The XJ13 was used in a publicity video. During the taping, a tyre blew on the MIRA track and the vehicle was nearly destroyed. This was its first public outing. Jaguar later had the car rebuilt and upon completion was shown at events as both a static display and in driving form. One of the engines, the better of the two, was destroyed due to over-revving. The other engine was fitted but the car could now only be driven at slow speeds. This engine used a welded piston which hindered the car from its true potential.

In 1971, having spent four years sitting under a cover in the factory, it was taken out of mothballs and returned to MIRA for some filming. With Norman Dewis back behind the wheel and driving past the camera at well over 140mph, a wheel gave way on the banking, flipping the car end over end twice, before rolling two more times and coming to rest on what remained of its wheels. Norman had the presence of mind to turn off the ignition during the accident, took refuge under the scuttle and escaped unhurt. Though the car was comprehensively wrecked, it was rebuilt and is still run today, albeit at less frantic speeds!

The vehicles sad history does not end there; in recent years it fell off a curb and its sump was punctured, the car was retired to the museum. Since then, the 'good' engine has been rebuilt, the body repainted, and the chassis repaired as needed.  On completion of the restoration it had been re painted in it's original colour.  And was shipped to Pebble Beach for Diplay rather than Concours.

The XJ 13 can be hired out for events at a cost.