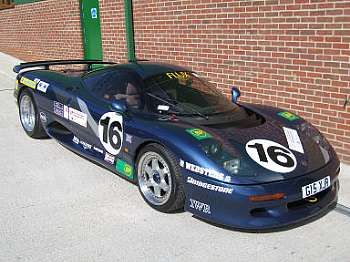 The Jaguar Sport XJR-15 is a RMR layout sports car produced by British automaker Jaguar between 1990 and 1992. Only 50 were made, each selling for US $960,165. Based mechanically on the Le Mans-winning Jaguar XJR-9, the car had an aerodynamic body styled by Peter Stevens, who later went on to style the McLaren F1.

The car's production was announced in a press release on November 15, 1990. It was then built by Jaguar Sport in Bloxham Oxfordshire (a subsidiary of TWR) England from 1990 to 1992. While all are now privately owned, some were built for professional racing.

The mid-engine, rear-wheel drive sports car is powered by a 450 hp (336 kW), naturally aspirated V12 engine of 5993 cc, and has a 6-speed manual, unsynchronized transmission (a 5-speed, synchromesh transmission was also available as an optional extra). The XJR-15’s chassis and bodywork are composed of carbon fiber and Kevlar, and its engine features an advanced electronically managed fuel injection system. The XJR-15 has a 0-60 mph time of 3.9 seconds and a (gearing limited) top speed of 191 mph (307 km/h).

Because of its V12 engine, power-hungry buyers saw the XJR-15 as an attractive alternative to the Jaguar XJ220, which was powered by a twin turbo V6. The XJ220 was also a limited production vehicle, of which 281 were built.

The XJR-15 stemmed from a concept car by Jaguar Sport and Tom Walkinshaw Racing (TWR) called Project R9R. The R9R was developed by Jaguar Sport for the purpose of testing the endurance of carbon and plastic bodywork at high speeds. It was based mechanically on the V12-powered XJR-9, which won the 1988 Le Mans. After thousands of miles of testing and thorough analysis, the R9R went into production as the Jaguar XJR-15 in 1990.

According to a press release by Jaguar Sport, it was built specifically with the 1991 Jaguar Sport Intercontinental Challenge in mind: a three-race competition held throughout the year as support events for the 1991 Formula One Grand Prix at Monaco, Silverstone, and Spa-Francorchamps.

Sixteen XJR-15s were entered in each of the first two events. The winner of the third and final race, Armin Hahne, was awarded a cash prize of US$1 million.

The most recent was sold at the Bonhams & Butterfields Auction in Carmel, CA in August 2004. It is reported to have been sold to a private collector for around US$175,000. The auctioned car in question was originally ordered in 1991 by British pop music producer Matt Aitken, one of the few owner-drivers participating in the Intercontinental Challenge.
Source: Wikipedia
Have you any further information on this car?
Click here to tell us.
There is 1 further picture
[View Full Gallery]
Related Contacts
[ suggest a contact ]
Related Links