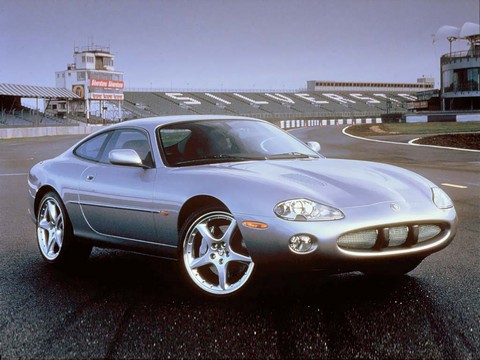 The new millennium dawned with Jaguar entering Formula 1 an event that was celebrated by the creation of the 'Silverstone' special edition of the XK8. This was based on the supercharged XKR version of the XK8.

The Silverstone was strictly oriented toward performance, with 20-inch alloy wheels shod with Pirelli's P-Zero tyres and Brembo 4-piston brakes with aluminium calipers.  The car was equipped with Jaguar's CATS (Computer Advanced Technology Suspension) system and a special handling pack developed by the company's SVO (Special Vehicles Operation) department. Originally, just 100 cars were planned, 50 coupes and 50 convertibles, which would be sold in Europe.

The cars proved so successful, however, that a further production run of 500 cars was set up to provide for the demand from the United States and the rest of the world.  Naturally, in view of the model's name, all 600 cars were painted in Platinum Silver.

The Silverstone model foreshadowed a new range of performance options, the R range, which became available as options on production cars later in the year.  The options included wheels, uprated brakes and handling packs specifically tailored to the XJR and XKR.  The R options were developed by the Special Vehicle Operations department, which had built the XK 180.

A Register for the Silverstone has just been created see www.xclusively-jaguar.com