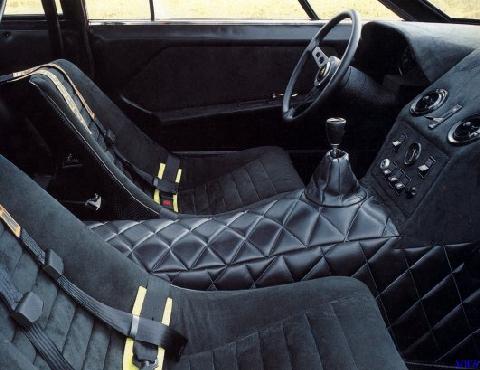 The replacement for the Islero as the 2+2 model in the Lamborghini range, the Jarama was introduced at the Geneva Motorshow of 1970. The front-engine rear-wheel-drive chassis was based on that of the Espada, although much shorter, whilst the mechanical parts were almost unchanged from that same car. The design was again by Bertone, a very low and wide two door coupé, instantly recogniseable from the partially covered headlights (the coverings were electrically operated) and two black NACA ducts in the bonnet.

Criticised for its heavy steering, poor driving position and weak cockpit design, it was nevertheless appreciated for its excellent ride and very tractable V12 engine. The performance was noted for its top-end acceleration, going on to a manufacturers claimed top speed of 162mph, at which speeds the Jarama is exceptionally stable, a trait which it also maintains when the roads get twistier with body roll well controlled. Road tests with an early car saw the standing km dispatched in 27 seconds and the 0 to 60mph sprint in 6.8 seconds.

During 1971 and 1972 the Jarama underwent a series of improvements, including more power, a redesigned interior of higher quality, new wheels, air vents, the option of a two-panel targa roof, redesigned bumpers and modified lighting (both these latter specifically for the US market). At Geneva in 1972 the car was 'relaunched' as the Jarama S.

Soon afterwards an automatic transmission (the same 3 speed Chrysler unit as offered in the Espada) became available as an option.