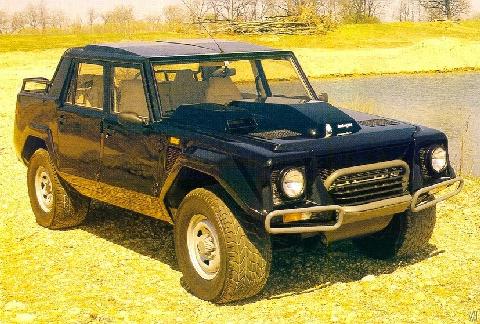 In 1977 Lamborghini developed a rear engined (Chrysler 5898cc V8 unit with 183bhp) four wheel drive vehicle, the Cheetah. This had been comissioned by MTI, a US company, as a fast, all-terrain vehicle for the armed forces but the performance was weak and the dynamics poor. After launch at the Geneva Motorshow of that year that project went no further.

It was not until 1981 that another attempt was made to develop a 4x4, this time called the LM001. Again with a rear-mounted engine (albeit this time with a Lamborghini V12) this model proved to have unacceptable characteristics due to the location of the engine. Shown at the Geneva Show of 1981 it was used to develop a new model.

Thus was born the LMA or LM002 in 1982, now with a front mounted V12 engine from the Countach. After a lengthy gestation priod, production began in 1986 featuring a number of changes, including the adoption of the Quattrovalvole engine.

Utilising a steel tube spaceframe chassis, the design was boxy, with a small exposed platform at the rear and enormous tyres. The bodywork was fibreglass (roof, bonnet and wings) and aluminium (doors). The 5.2-litre 48-valve V12 from the Countach was coupled to a ZF gearbox (5-speed with a 2-speed transfer box) and a part-time four-wheel-drive system (utilising free-wheeling front hubs). Inside, the four seat cockpit was trimmed luxuriously with leather and included air conditioning etc.

One example powered by a 3-litre 6 cylinder turbodiesel (by VM) was built, known as the LM003. Another limited volume model was the LM004 which used a Lamborghini 7257cc quad-cam V12 developed for powerboats which generated 420bhp. A rally version of the LM002 was also developed and used by Munari in various Raids, featuring larger fuel tanks, still more power and a significant reuction in weight.