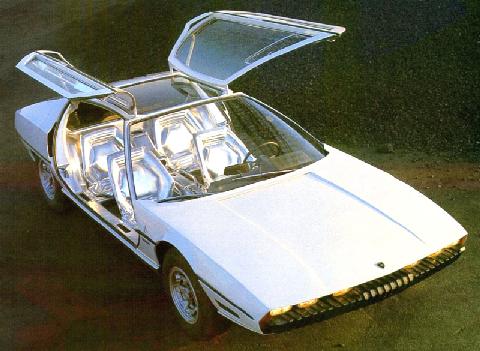 The Marzal was first shown to the public at the Geneva Motorshow in 1967. A concept car designed by Gandini (who was working at Bertone), it was Lamborghinis first attempt at a proper four-seater. It used a stretched Miura chassis with an in-line six-cylinder 2-litre engine mounted transversely at the rear. This was derived from the V12 unit in the Miura, effectively being the latter engine cut in half longitudinally. The external design was dominated by the almost completely glass gull-wing doors and the transparent roof panel, and the noticeable lack of height, the overall height was only 1100mm. Lamborghini did not like the design and so it remained a one-off. The next attempt at a four-seater was the Espada.
Source: Motorbase