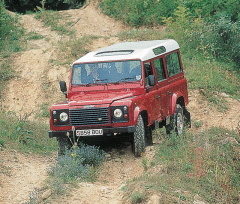 The biggest change to the Land Rover came in late 1990, when it became the Land Rover Defender, instead of the Land Rover Ninety or One Ten. This was because in 1989 the company had introduced the Discovery model, requiring the original Land Rover to acquire a name. The Discovery also had a new turbodiesel engine. This was also loosely based on the existing 2.5-litre turbo unit, and was built on the same production line, but had a modern alloy cylinder head, improved turbocharging, intercooling and direct injection. The 200Tdi as it was called produced 107 hp (111 in the Discovery), and 188 lb·ft of torque (195 lb·ft in the Discovery), which was nearly a 25% improvement on the engine it replaced. The reason for the engine being detuned was to reduce engine stress and improve service life under prolonged periods of high engine speeds, such as when engaged in heavy towing, which the company reasoned were more likely to be encountered with a utility Land Rover than with a Discovery.

Td5 pushes the modern Defender at a fair rate of knots, despite garden shed aerodynamics.  Still not too popular with DIY mechanics.