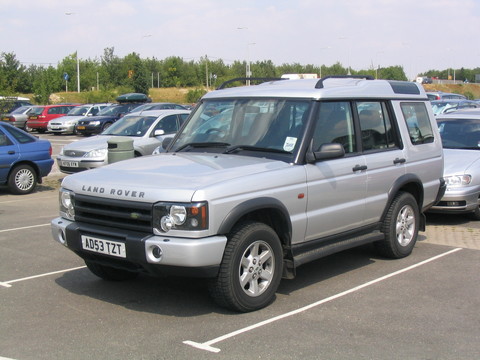 The Discovery 3 was an entirely new design, sharing not a single component with the outgoing model. Its styling is still traditional Land Rover, with function dictating the look, rather than fashion, and with lots of horizontal and vertical lines. It retains the key features of the Discovery, such as the stepped roofline and steeply-raked windscreen.

Construction-wise, Land Rover developed an all-new method which they called Integrated Body Frame (IBF). The previous Discovery models had used a traditional, strong ladder-frame chassis. Whilst tough in off-road use, these are heavy and detract from the on-road handling of the vehicle. Monocoque vehicles are more rigid, giving improved high-speed handling, but can be damaged by the stresses involved in heavy off-road use. In the IBF the body, engine bay and passenger compartment is built as a monocoque, which is mated to a basic ladder-chassis holding the gearbox and suspension. It claimed to combine the virtues of both systems, but does make the Discovery 3 uncommonly heavy for its size stunting on-road performance and off-road agility.

Another big change was the fitting of Fully independent suspension (FIS). Like the Series III Range Rover, this was an air suspension system, which allowed the ride-height of the vehicle to be altered by simply pumping up or deflating the air bags. The vehicle can be raised to provide ground clearance when off-road, but lowered at high speeds to improve handling. FIS has been seen as inferior to the older beam-axle when off-road due to its tendency to make the vehicle ground out. Land Rover developed 'cross-linked' air suspension to solve this problem- when needed, the suspension mimics the action of a beam axle (as one wheel drops, the other rises). In the UK and European markets, a coil-spring independent suspension system was offered on the base model. This model was unique in the range by having only 5 seats and only being available with the 2.7-litre diesel engine.

The engines used in the Discovery 3 were all taken from Land Rover's sister company, Jaguar. A 2.7-litre, 195 horsepower (145 kW) V6 diesel engine (the TdV6) was intended to be the biggest seller in Europe. For the US-market and as the high-performance option elsewhere, a 4.4 litre petrol V8 of 300 horsepower (223 kW) was chosen. A 216 horsepower 4.0-litre V6 petrol engine taken from the Ford stable was available in North America and Australia. The gearboxes on the Discovery 3 were also all-new. For the diesel engine, a 6-speed manual gearbox was standard. As an option, and as standard on the V8 engine, a 6-speed automatic transmission was available. Both came with a 2-speed transfer box and permanent 4-wheel-drive. A computer controlled progressively locking central differential ensured traction was retained in tough conditions. A similar differential was available on the rear axle to aid traction.

Arguably the biggest feature of the new vehicle was the innovative 'Terrain Response' system (this system won a Popular Science award in 2005). Previously, off-road driving had been a skill that many drivers found daunting. A wide-ranging knowledge of the vehicle was needed to be able to select the correct gear, transfer ratio, various differential systems and master various techniques required for tackling steep hills, deep water and other tough terrain. Terrain Response attempted to take away as many of the difficulties as possible. The driver selected a terrain type on a dial in the cab of the vehicle (the options are "Sand", "Ice/Grass/Snow", "Mud/Ruts" and "Rock Crawl".) The on-board computer systems then select the correct gearbox settings, adjust the suspension height, adjust the differential lock settings and even alter the throttle response of the engine suitable for the terrain.