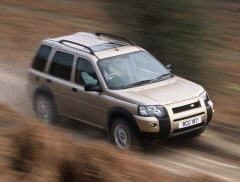 Facelifted model gained much more purposeful front end and improved reliability. Fine family car: even 3dr models have loads of space in the back. V6 is a real sweetie but, boy, can it drink.

Max Load Capacity 1194-litre Insurance Group 10-13
Source: Motorbase
The Freelander, wholly designed by the Rover Group after early talks of a co-operation with BMW resulted in disinterest from the German side. Despite this, BMW secretly proceeded with their BMW X3, inspired by the Freelander prototype. It came off the production line in late 1997. It rapidly became the best selling compact 4x4 in Europe, outselling the BMW X3, as well as many other small "off-roaders".