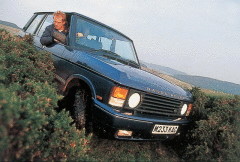 Looks every inch the classic car that it is. Desirable 300Tdi versions are very rare but worth looking for. Check carefully for corrosion.

Max Load Capacity 1.7 cubic metres Insurance Group 13-16
Source: Motorbase
The first generation Range Rover was introduced in 1970. Improvements compared to the Land Rover "Series" models included permanent four-wheel-drive with a lockable centre differential, all-coil suspension, disc brakes on all wheels, and a 3.5 L aluminium Rover V8 engine. The vehicle was built on a steel ladder frame, and most body panels were aluminium. However, design weaknesses, such as using steel bolts to fasten aluminium panels and poor anti-corrosion protection of the chassis, resulted in the vehicles suffering from electrolytic corrosion. While this problem did not appear for some time, after 10 years of ownership it became a severe problem. In a car with shorter expected lifetime, this would have not been a problem. In a car like the Range Rover, which runs well even when 20 years old, it is, and needs to be corrected, by means such as Waxoyling the chassis and using stainless steel bolts.

Originally the car was a three-door design (with the "third door" being a horizontally split tailgate), and it came with a four-speed gearbox. A Fairey overdrive was available ex-works from 1973. A factory-built version with five doors arrived in 1981 due to market pressure; external coachbuilders had already found success with conversions. The gearbox was improved to a five-speed manual transmission with the option of a three-speed Chrysler Torqueflite automatic, subsequently superseded by a ZF four-speed which improved fuel economy and refinement but is generally regarded as not quite a strong as the Chrysler. It was soon after given a BorgWarner viscous coupling transfer box.

The original Buick 3.5-litre engine gave the original so much power and torque that it was popular with the police. Later upgrades enlarged the capacity to 3.9 litres and culminated in the 4.2-litre V8 block in the 1994/95 model. When people began to demand better fuel economy, Land Rover introduced a diesel. Originally, the Turbo D model used a 2.4-litre turbodiesel engine from Italian manufacturer VM Motori, similar to their engine fitted to the Rover SD1 and 800-series cars, but this had been intended to be a smooth petrol-like engine for cars, not off-roaders. Eventually the Land Rover 2.5-litre Tdi as used in other Land Rovers was fitted, and this gave good on- and off-road performance, combined with acceptable fuel economy for a vehicle as heavy as the Range Rover.

Land-Rover first officially exported the Range Rover to the United States in 1987, seventeen years after its introduction, by which time it was a popular grey market car. Practical Classics March 2002 - Featuring Buyers Guide Range Rover (1970-1996).  Click Here to view in our shop.