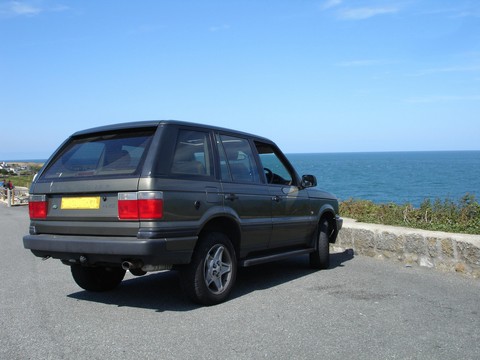 Land Rover's Cinderella model is becoming more attractive. If you find a well-maintained one it's a bargain, but it's a big 'if'. Diesel refined but gutless - take the mpg hit and go for a V8.

Source: Motorbase
After 25 years from the introduction of the first generation Range Rover, the second generation Range Rover — model-designation P38A — was introduced for the 1995 model year, with an updated version of the Rover V8 engines. There was also the option of a 2.5-litre BMW turbo-diesel and this was made possible by BMW's ownership of the Land Rover brand from 1994 to 2000. The new model was even more luxurious, incorporated new engine management (smoother and more powerful) and improved air suspension that allowed automatic, speed proportional height adjustment. This could also detect when the vehicle had become 'grounded' and attempt to raise itself to maximum height in an attempt to gain traction. The chassis was also made stronger and new welding techniques were used. Other features included anti-lock braking system and two-wheel traction control — although later models saw this feature applied to all four wheels. In 2000 the Range Rover was facelifted and three special edition models were released:

The Anniversary edition which was was manafactured in wimbledon green with green leather upholstery and cream piping.

The Range Rover Linley: This is the most exclusive range rover ever made. It was designed by the famous interior designer David Linley [1]. The Range Rover Linley was entirely black, with black top quality leather upholstery, black lambswool rugs, black ebony wood inserts, black leather headlining, black tinted alloys and an endless list of other exquisitely made additions. All electrical accessories such as a full entertainment package came as standard. At the time of release the Range Rover Linley retailed for over £100,000 in the UK and only 10 models were ever created. This is up to date the most exclusive Range Rover ever created! In 2006 the first Range Rover Linley came on the used market (in the UK). The reserve price at auction was £40,000 but it sold for a disclosed price for well over this. This is impressive for a car that cost £100,000 new and for the fact that at this time the new model Range Rover could have been bought for £42,000, a little more than the reserve price.

The Range Rover Westminster: This was available in either silver or grey paintwork different from the usual paintwork of those colours available and grey tinted alloys. The interior was available in "Westminster Grey" leather upholstery with black piping, light grey poplar wood interior, and further colour coordination to the carpets and ceiling. 400 Range Rover Westminsters were produced; 200 4.0 litre petrol models and 2.5 litre diesel models.
Source: Wikipedia