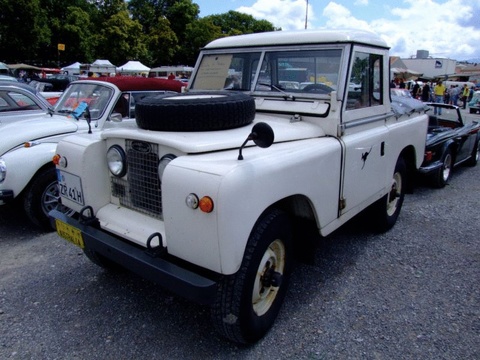 Land Rover entered production in 1948 with what was later termed the Series I. This was launched at the Amsterdam Motor Show. It was originally designed for farm and light industrial use, and had a steel box-section chassis, and an aluminum body. Originally based on the US Army Jeep the Land Rover was a single model offering, which from 1948 until 1951 used an 80 in (2032 mm) wheelbase and a 1.6-litre petrol engine. This was a basic vehicle, tops for the doors and a roof (canvas or metal) were optional extras. In 1950, the lights moved from a position behind the grille to protruding through the grille.

1956 saw the introduction of the first five-door model, on the 107 in chassis known as the "Station Wagon" with seating for up to ten people. The 86 in model was a three-door seven-seater. The new Station Wagons were very different to the previous Tickford model, being built with simple metal panels and bolt-together construction instead of the complex wooden structure of the older Station Wagon. They were intended to be used both as commercial vehicles as people-carriers for transporting workmen to remote locations, as well as by private users. Like the Tickford version, they came with basic interior trim and equipment such as roof vents and interior lights.  Practical Classics October 2008 - Featuring Buyers Guide Land Rover Series I (1947-1958).  Click Here to view in our shop.

Slow, bouncy, primitive interiors and vague steering - but fun to drive and to own, if you get a good one.  Look for as near to original spec as possible; worth paying for a cherished one.