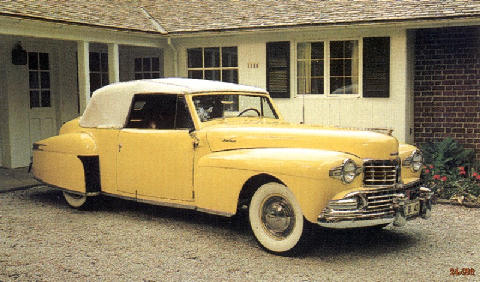 The Lincoln Continental made its appearance in 1940.  This car was the foundation of the post-war models.  In common with other car makers. Lincoln worked for the army during the war, making 145,000 Jeep bodies, 25,332 tank engines and 24,929 engine mounts for B-24 bombers.  There was no time during the war for the development of new car models so the Lincolns that rolled off the line on 10 January 1946 were almost the same as those of 1940.

Only the bumpers, wheel nave plates and chrome trim on the bonnet or hood were different.  The cheapest model was just known as a Lincoln and had a 5 litre V-12 with power output of 130 bhp at 3,600 rpm.  In addition to the "cheaper" Lincolns, there were also the more expensive Continental models in coupe and convertible versions.  The Continental cost three times as much as a Ford coupe or convertible of those days.  Of the 13,496 cars Lincoln sold in 1946, there were 466 Continentals (265 coupes and 201 convertibles). 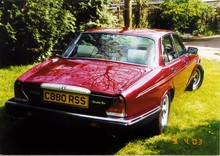