When Lotus introduced its new model, the Europa, it brought the concept of a mid-engined car within reach of small sportscar buyers for the first time. Up-until then mid-engined sportscars had only been seen from the likes of Ferrari and the Ford GT40, the Europa would change this forever.

The Europa combined the usual excellent handling characteristics, separate chassis and GRP body construction. A modified R16 engine was supplied by Renault, European cars having 1470cc and US models using a bigger 1565cc unit. In 1969 a S2 version of the Europa appeared featuring a better body design and electric window lifts. 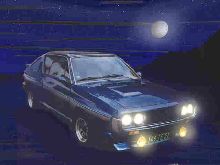