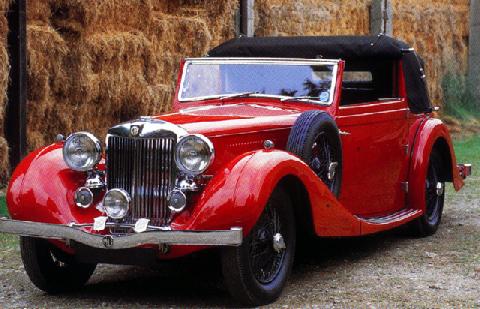 The WA, Tickford Coupe was a superb car introduced into a difficult and competitive market. It was a high standard car, luxuriously fitted and well built, that performed not as a sports car but as a fast solid touring car. After 11 months and only 358 examples made the outbreak of the war stopped the production. Probably in an attempt to battle with the very similar Side Swallow SS or later named Jaguar Mark IV or 3½ Litre Bentley, the MG SA (2.0 Litre) and then the in late 1938 the MG WA (2.6 Litre) was designed and put to production. Still a 6-cylinder car, the WA had an even longer bonnet on the same but widened chassis as the SA, a bored out 2.6 Litre engine, a dry clutch, balanced crankshaft, synchromesh on 2nd, 3rd and 4th gears and a new instrument panel.

The 1938 Motor show saw the introduction of the WA model for MG: "High performance engine in an improved type of chassis carrying more capacious coachwork." "A 2.6-Litre car designed to give high maximum speed, first-class road holding and to reach very high standards of reliability and long life. It could outrun a standard SS 2.5 Litre (Jaguar) and give a SS 3.5 Litre quite a run for its money."

Appearance, Design and Production:
The 2.6 Litre MG has wonderful lines characterized by the long horizontal bonnet, the v-fronted radiator which merged with the front wings, the octagonal sidelights from the P type and the v-formed front bumper. There were three body styles available, the Saloon at £442, the Tickford Drophead Coupé at £468, and the Open Tourer at £450. In production 297 saloons were produced, 52 Tickford Drophead Coupés (only 22 remaining in the world), and 9 Tourers. The instrument panel of the WA was a new and stylish design arranged so that the large dials of the speedometer and revolution counter are high up within easy vision, together with the clock and other dials. Below this panel is a sub-panel with all the minor controls. Interior trim was to a high standard.

Drivetrain and Mechanicals:
The engine for the WA is rated at 95.5 bhp @ 4’400 rpm. Six cylinders, 73 X 102mm, equating to 2561 cc. The detachable iron cylinder head was machined for higher compression than that of the SA. The block, also of cast iron, finished with an aluminium oil sump of 2 gallon capacity. The counter-balanced crankshaft is mounted in four main bearings. Twin semi-down draught S.U. carburettors feed into a hot-spot type straight inlet manifold. One of the most interesting features of this M.G. engine is its lubrication system. Oil is forced round the bearings by a gear pump, but special provision is made for filtering, cooling and rapid warming up from cold. Before the oil is served under pressure to the bearings it has to pass through a long and closely wound coil of copper pipe which is situated inside a water gallery running from end to end of the base of the cylinder water jacket. The exterior of this coil is therefore submerged in the water. When the engine is at work, the cool water from the base of the radiator is fed by the water impeller past the coil on its way to the base of the cylinder jacket, and thereby the oil temperature is prevented from rising undesirably high. But when the engine is cold and is started up, the automatic thermostat control is short circuiting the radiator in order that the water in the cylinder jackets shall warms up as rapidly as possible, and this being so, the coil of the copper tube of the oil system is warmed up rapidly with the water.  It is a ventilated Borg & Beck dry plate clutch coupled with a four speed gear box that had synchromesh on second, third and top. A secondary fume panel of steel and wood was placed in front of the existing bulkhead, reducing noise, fumes and heat transmitted into the passenger compartment. The chassis frame of the WA is a boxed welded steel construction. Box sections are used throughout. The wheel base of the car is 10 ft. 3 in., the front track measures 4ft 5in and the rear 4 ft. 8 3/8in. The steering is incorporated in the Bishop cam gear, with a medium ratio, the steering column is adjustable for length. Lockheed hydraulic brakes are fitted and have twin master cylinders giving independent balanced operation between front and rear. The brake drums are 14 in. in diameter At the rear of the chassis is a 16 gallon fuel tank. A gauge on the instrument panel show the petrol contents, and alternatively the level of oil in the engine sump when a button is pressed. The Jackall hydraulic jack system was standard equipment. This system allows the fore, aft, or entire car to be raised from inside the car.  The headlamp system is arranged so that a foot switches cuts off the head lamps and brings on a pass light mounted in the centre of the front bumper.

Interior:
The new style instrument panel of the WA, constructed of solid mahogany, continued in door capping of the same wood at high polish standard. The doors are trimmed in leather with adjustable arm rests and neatly trimmed pockets. The front seats are of the bucket style seen in previous MG models, but are more supportive helping a the comfortable ride. The rear seats are noticeably higher than the front to allow the rear occupants a full view. Pull out ash trays, and a folding centre arm rest compliments the rear seats as well. The two tall doors meet the driver at nearly shoulder height. MG logos appear throughout the interior, with octagon shape themes carried out in the instrument layout, ash trays, door handles, and such.

Exterior:
The Tickford bodies by Salmons and Sons were a three position Drophead Coupe; witch is a fully enclosed design with roll up windows and full passenger protection. By the late 1930's the Tickford name was synonymous with a rage of extremely prestigious patented 'Tickford' convertible hoods. The De Ville-Position accomplished by pulling back the hood material, and then folding in the cant rails, then rolling the top material and securing it with two straps. From this point the folding mechanism is released by 'breaking' the pram irons from over-centre to full open position. All three positions are distinctive to the car and create a different look and feel to the driving experience. The boot lid is designed to remain open and carry additional luggage, probably necessary as the boot section of the car is limited in space. The tools are also housed in the boot lid. The body lines are very neat and well maintained. Great difficulty and craftsmanship was necessary to allow such large doors to function well in an open car. As the shown WA 0525, some few other Tickfords left the factory with dual side mounted spare wheels in the wings, which created a more formal appearance