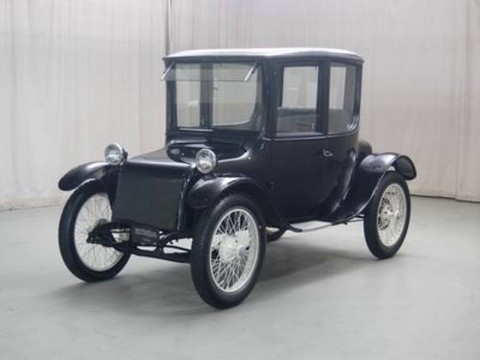 Supplied by General Electric, the DC-fed motor was controlled by a non-arcing rotating drum that yielded four-forward and two-reverse speeds. With a range of fifty miles and a coachwork dependent top speed of between 15mph and 19mph, the Milburn Light Electric was altogether more practical than some of its petrol-supping peers. Albeit that driving anywhere `off the grid' could result in a one-way trip. However, in the urban environment for which they were primarily intended the Model 15 Coupe and Model 151 Roadster made a lot of sense. Lighter and more agile than the comparable machines fielded by Baker and Detroit, the Milburn was also less expensive.

Initial sales were brisk and it was not long before the Light Electric range expanded to include Brougham, Town Car, Sedan and even Delivery Truck variants. Bowing to mainstream tastes, Milburn seemingly made its products look ever more conventional with every passing season. A factory fire caused $900,000 worth of losses during 1919. And while Milburn recovered, its focus increasingly turned towards making coachwork for other firms. Unable to resist a $2,000,000 offer from General Motors in February 1923, production of the Light Electric stopped shortly thereafter. Favoured by the likes of President Woodrow Wilson (not to mention his secret service officers), Milburns have long been collectible. Indeed, a 1915 Light Electric took second pace in the Antique class at the 1962 Pebble Beach Concours d'Elegance.
Source: Motorbase
Have you any further information on this car?
Click here to tell us.
There are 11 further pictures
[View Full Gallery]
Related Contacts
[ suggest a contact ]
Related Links