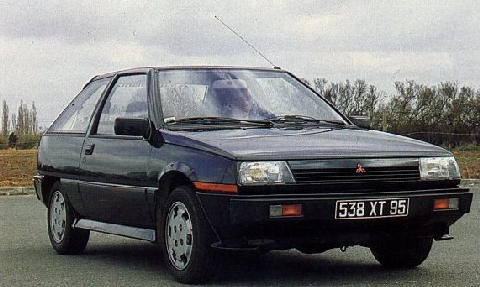 Mitsubishi launched a new Colt in 1983, still splitting the range into Mirage (three- and five-door hatchback) and Lancer Fiore (four-door sedan) models, though some export markets did sell the four-door as the Mirage. A station wagon was added in 1985 and a four-wheel-drive wagon in 1986.

Engine power for the 4G32BT engine for the USDM "Turbo Sport" model, was 105 horsepower; the 3 door hatchback Turbo Sport weighted in at a low 2005 USDM pounds.

Many export markets sold the hatchbacks as the Mirage or Colt, and the sedan and station wagon as the Lancer.

A commercial version of the wagon was sold in New Zealand as the Mitsubishi Express, replacing an earlier model based on the Mitsubishi Galant Sigma.

The Mirage was not sold in the United States by Mitsubishi until 1985, and it was this version that made the marque's début there.

The four-door model formed the basis of the Proton Saga, Malaysia's first locally built car. Proton would spin the Saga off into a five-door hatchback (styled differently from Mitsubishi's own five-door hatch version) called the Saga Aeroback in 1987.
Source: Wikipedia