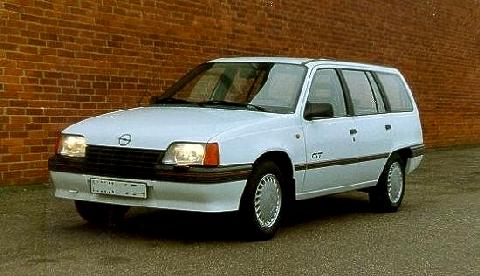 The Kadett E (Vauxhall Astra Mark 2 in the UK) was introduced in 1984, and was voted Car of the Year in 1985, largely due to its advanced aerodynamic body styling. The 1984 model was also developed into a more conventional "three box" design with a boot (trunk), badged as the Vauxhall Belmont in the UK and the Opel Monza in South Africa. A convertible version was also available, for the first time in 1987, built by Bertone of Torino/Italy. For the 1988 model, capacities were raised to 1400, 1800 and a new 2000 cc engine, again used on the GSi and Vauxhall Astra GTE. In 1988, a 16-valve twin-cam version was developed for a high performance GSi/GTE model, yielding 156 hp (115 kW) in manufactured form.

The Kadett E has been seen as a grey import in the UK, but it is not as popular as the Vauxhall Astra Mark 2. It was never officially sold in Britain, and by 1989 General Motors was only marketing the Vauxhall brand in the UK.

In the late 1980s and early 1990s, South African Kadett GSi's were upgraded for touring car competitions and around 500 were built for homoligation purposes. They featured more aggressive cams, a locally developed limited slip differential and special 15" wheels, they were nicknamed the Superboss, produced 125 kW (168 hp).

The Kadett E was introduced in Brazil as the Chevrolet Kadett, but the three-door station wagon was called the Chevrolet Ipanema.

It formed the basis of the Daewoo LeMans (later known as the Daewoo Cielo, Racer and Nexia) in South Korea, and also as Heaven in Chile (Nexia being the HB version), which was sold in the United States and New Zealand as the Pontiac LeMans, and in Canada (initially) as the Passport Optima. LeMans sales ended in 1993. The Nexia is still being produced at UzDaewoo plant in Asaka, Uzbekistan. The Cielo was last being produced at a semi-independent (from GM) plant in Craiova, Romania (the license expired in fall 2006).
Source: Wikipedia
Have you any further information on this car?
Click here to tell us.
There are 4 further pictures
[View Full Gallery]
Related Contacts
[ suggest a contact ]
Related Links